YANGON, Myanmar -- Hundreds of Buddhist monks marched in Myanmar Sunday to support President Thein Sein's suggestion that Muslim Rohingya be deported or held in camps, in the biggest rally since the end of junta rule. 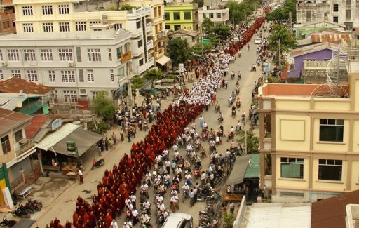 << Myanmar Buddhist monks rally on the streets of Mandalay (AFP)

Lines of clerics wearing their traditional deep red robes passed through the streets of Mandalay flanked by crowds of supporters in scenes not witnessed since a monk-led protest in 2007, which was brutally crushed by the country's then military leaders.

"Protect Mother Myanmar by supporting the President," read one banner, while others criticised United Nations human rights envoy Tomas Ojea Quintana, who has faced accusations that he is biased in favour of the Rohingya, following deadly unrest between Buddhists and Muslims in western Rakhine state.

Wirathu, the 45-year-old monk who led the march, claimed that as many as 5,000 monks had joined the procession, with another several thousand people taking to the streets to watch.

He told AFP the protest was to "let the world know that Rohingya are not among Myanmar's ethnic groups at all".

The monk, who goes by one name, said the aim was also to condemn "terrorism of Rohingya Bengalis who cruelly killed ethnic Rakhines".

Speaking a dialect similar to one in neighbouring Bangladesh, the estimated 800,000 Rohingya in Myanmar are seen by the government and many Burmese as illegal immigrants and the violence has stoked a wave of anger across the Buddhist-majority country.

Fighting in Rakhine state has left almost 90 people from both sides dead since June, according to an official estimate, although rights groups fear the real toll is much higher.

New York-based Human Rights Watch has accused Myanmar forces of opening fire on Rohingya Muslims during the violence, prompting concern across the Islamic world over the treatment of the stateless group, described by the UN as one of the world's most persecuted people.

Myanmar has denied a crackdown on Muslims and launched an inquiry into the violence, while Thein Sein has accused Buddhist monks, politicians and other ethnic Rakhine figures of kindling hatred towards the Rohingya in a report sent to parliament last month.

But in comments to the UN High Commissioner for Refugees Antonio Guterres, published on his official website in July, he suggested it was "impossible to accept the illegally entered Rohingya, who are not our ethnicity" and mooted sending the group to a third country or UN administered camps.

Wirathu said Thein Sein, a former general who has launched a series of reforms after taking power last year, had "stood firmly" in his comments to the UN. Although he added that the Rohingya could become citizens, "if they stay peacefully".

Rallies are expected to continue for two more days, including one in Pakokku town in the Magway region, which was the birthplace of the 2007 mass pro-democracy protests that became known as the Saffron Revolution because of the colour of the monks' robes.