Arakan, Myanmar -- After a year that saw Buddhist and Muslim communities in Burma’s Arakan State engage in numerous bloody clashes, the state government has now taken the step of welcoming Buddhist Arakanese from neighboring Bangladesh. But it is resettling them in violence-wracked northern parts of the state. 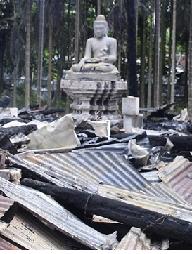 “We have not set how many we will accept, but if they come, we will help them,” he said by telephone.

More than a dozen Buddhist temples and 45 houses were set ablaze after hundreds of Muslim protesters ran riot in Cox’s Bazar on Sept. 29 last year. Following the violence some Buddhist groups have begun leaving Bangladesh for western Burma’s Arakan State.

There are some 300,000 Arakanese and other Buddhist minority groups living in southeastern Bangladesh, according to some estimates.

The tensions in Bangladesh’s Cox Bazar District seemed to be a spillover of the inter-communal violence in Burma’s neighboring Arakan State, where Arakanese Buddhist and Muslim Rohingya clashed repeatedly after an outbreak of violence since June last year.

During waves of religious communal violence that swept over Arakan State scores of people were killed, villages were burned down and some 115,000 people—mostly Muslim Rohingya—fled their homes.

According to a local social worker, “two or three” Buddhist families from Bangladesh were crossing into Maungdaw Township in northern Arakan State daily since December.

“We have to help them because they are fellow [Arakanese] ethnic group,” said the worker, who preferred not to be named.

State official Win Myaing said the local government had decided to settle these new arrivals in Maungdaw Township, where it had begun to create guarded and government-supported “model villages” for them.

“So far we have provided for 44 households in our ethnic villages in Maungdaw,” he said. “We provide homes and 2 acres of farmland to each household.”

Newcomers, he explained, were first being settled at Baho Buddhist monastery in Maungdaw town, where they would receive assistance before being transported to the “model villages” located about 10 to 15 km from central Maungdaw town.

Win Myaing said the newly-arrived Arakanese would be provided with security by Maungdaw township authorities and Burma Border Securtiy Force, who they could contact for protection in case of local communal tensions.

“We take care of their security and there is no need to worry about it,” he claimed.

Maungdaw Township in northern Arakan State was one of the scenes of bloody clashes between Muslim Rohingya’s and Buddhist Arakanese last year.

Buddhist and Muslim communities live in close proximity of each other in parts of Arakan State. In most parts, Buddhist communities outnumber Muslims.

In Maungdaw Township the Rohingya are present in greater numbers and the Buddhist villagers who did live there, fled after last year’s outburst of violence, leaving for Sittwe Township and other areas further south.

A Maungdaw resident said that tensions there had come down and the security situation was “stable,” although people felt “fear in their minds.”

He said that it made sense to settle Buddhist arrivals in the area, as there so few of them left. “We have 600,000 Muslims here, but only 20,000 Buddhists,” claimed the resident, who preferred not be named.

It remained unclear on Friday, whether the families who had left Bangladesh were aware of the fact that they were being settled in an area that was the scene of recent inter-communal violence.

Arakan State’s Buddhist leaders have been accused by international human rights groups of being complicit in last year’s violence. State authorities allegedly offered little support to Muslim Rohingya communities that were being attacked, while the communities were being encouraged to leave.