RANGOON, Burma -- About 200 senior Buddhist monks convening in Rangoon on Thursday have begun drafting a religious law that would put restrictions on
marriages Buddhist women and Muslim men. 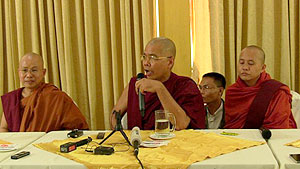 << Buddhist monks U Dhammapiya, Dhamma Duta Ashin Saykaneda (C) and U Wirathu (R) discuss their plans to push for a law that restricts interfaith marriage. (Photo: The Irrawaddy)

Ahead of the two-day conference, the monks — who are highly revered in Burma — had said that they would meet to discuss how to resolve ongoing tensions between Buddhists and the country’s Muslim minority.

On Thursday, the monks announced that preventing interfaith marriage would help improve inter-communal relations in Burma, and much of their time was spent discussing a 15-page draft law that would introduce the restriction.

“We hold this meeting with the intention of protecting our Buddhist race and our religion, and also to have peace and harmony in our community,” said U Dhammapiya, a senior monk and a spokesman for the convention.

U Wirathu, a well-known nationalist monk, said he was delighted with the plans to try to stop any Buddhist woman from marrying a Muslim man. “I have dreamed of this law for a long time. It is important to have this law to protect our Buddhist women’s freedom,” he said during a press conference.

U Wirathu leads the controversial 969 campaign that is being implemented all over Burma. It encourages Buddhists not to do business with Muslims and only support fellow Buddhists’ shops.

The participants of the conference came from townships across Burma to convene at a monastery in Rangoon’s Hmawbi Township.

The monks said they would collect signatures to pressure Burma’s Parliament to adopt the law, adding that they would send letters to President Thein Sein, opposition leader Aung San Suu Kyi and all other lawmakers.

They said the law would follow other examples of restrictions on interfaith marriage, such as those that are in place in Singapore and in Muslim-majority Malaysia.

“We found that there was peace and harmony in Singapore after they ratify this law in their country. This is why we should not have a problem [passing a similar law] in our country,” U Dhammapiya told reporters.

Singapore and Malaysia both have long-standing restrictions on interfaith marriage between Muslims and people from other religions. The rules require that non-Muslims convert to Islam in order to register their marriage.

A copy of the law proposed by the monks would require any Buddhist woman seeking to marry a Muslim man to first gain permission from her parents and local government officials. It also requires any Muslim man who marries a Buddhist woman to convert to Buddhism.

Those who do not follow these rules could face up to 10 years in prison and have their property confiscated, according to the draft law.

Kyaw Khin, secretary of the All Myanmar Muslim Federation, said the proposed law would violate basic human rights. “In terms of human rights, this type of restriction would be an abuse,” he said.

The Universal Declaration of Human Rights Article 16 states that “Men and women of full age, without any limitation due to race, nationality or religion, have the right to marry and to found a family.”

Kyaw Khin doubted however, that the draft law would be adopted by lawmakers, adding, “There would be a long way to go, if it is to be passed in Parliament. I believe it won’t happen.”

Kyee Myint, a senior lawyer and member of the Myanmar Lawyers’ Network, warned against passing a prohibitive religious rule into law. Burma’s government, he said, “should be careful not to pass a law just to protect one particular religion.”

The proposed law comes at a time of growing sectarian tensions between Burma’s Buddhists and Muslims, who are estimated to make up some 5 percent of the country’s total population.

Violence between Buddhists and Muslim communities broke out in Arakan State, western Burma, in June last year. The unrest has since spread to dozens of towns in other parts of the country. Hundreds of people have been killed and more than 150,000 people — mostly Muslims — have been forced to flee their homes.

Nationalist Buddhist monks have been accused of openly supporting the violence by calling for the removal Muslims to leave towns and villages in order to establish Buddhist dominance. In some cases, monks were reportedly observed participating in and organizing the street violence.

Other Burmese monks however, have also criticized the actions of their nationalist brothers. U Pantavunsa, the leader of the Saffron Monks Network, told The Irrawaddy recently that he rejected the 969 campaign, as it was stoking up inter-communal tensions in Burma.
TOP