YANGON, Myanmar -- Authorities in Myanmar arrested 44 suspects for their alleged role in sectarian violence that wracked a coastal township in western Myanmar over the last week, state media reported. 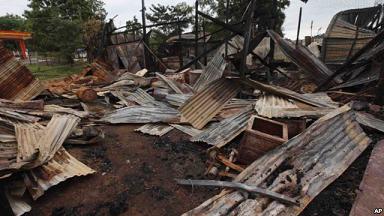 Five Muslims were killed and scores of homes set on fire when Buddhist mobs went on a rampage in Thandwe, a coastal township in Rakhine state.

The violence came even as President Thein Sein visited the region last week for the first time since in Rakhine in June 2012, killing hundreds of people and forcing more than 140,000 more to flee, the majority of them Muslim.

Few details were released about the latest arrests but a report broadcast on state television late Saturday indicated members of both communities were arrested.

Officials in Rakhine state said last week that the chairman of a Rakhine political party and several of its members were among those detained.

On Sunday, the state-run Myanma Ahlin newspaper put the total of houses burned down in Thandwe last week at 114 houses. It said three religious buildings - most likely mosques - were destroyed, and 482 people were left homeless.

Thein Sein has been widely praised for overseeing an unprecedented political opening in the Southeast Asian nation since the army ceded power two years ago to a nominally civilian government led by retired military officers.

But rights groups also accuse his government of tolerating, or even abetting, what they describe as ethnic cleansing directed against Muslims in Myanmar, also known as Burma.

They say authorities have done little to crack down on religious intolerance and failed to bridge a divide that has left hundreds of thousands of Muslims marginalized, many of them confined by security forces in inadequately equipped camps after fleeing their homes.