In Myanmar, a Buddhist siege mentality at work?

Singapore -- Since religious violence erupted in western Myanmar in 2012 and subsequently spread to other parts, there has been a litany of analyses on the plight of the Rohingya and the underlying causes of the conflict. Regarding the causes, much emphasis is placed on the actions of nationalists and a controversial group of chauvinistic monks called the 969 Movement. 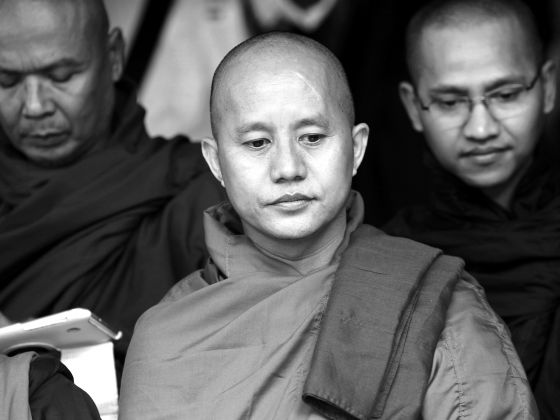 Analysts also attribute the violence to the loosening of military control and of censorship, absence of the rule of law and machinations of disgruntled factions within government. President Thein Sein’s administration has also been accused of inaction and even deliberate involvement.

While these are recent factors that have precipitated violence against Muslims in Myanmar, other critical issues have been overlooked — especially a long-standing siege mentality of the Myanmarese populace, drawing on Buddhist millenarianism and a sense of demographic besiegement.

Among Myanmarese Buddhists, there is a widespread belief that Buddhism will disappear in the future. While international coverage points to Myanmar’s religious demographics to discredit fears of Islamic encroachment, Myanmarese Buddhists have a starkly different world view, where their faith is besieged by larger and better-organised faiths.

This millenarianism can be traced to a scripturally unsupported, but widely believed, “prophecy” that Buddhism will disappear 5,000 years after the Buddha’s passing. As 1956 is considered the halfway point, the belief is that Buddhism is now declining irreversibly.

The collapse of state support for Buddhism following British colonisation, the colonial government’s tacit support for Christian missionaries and the large influx of migrant labour from British India created a sense of religious and demographic encroachment, fuelling millenarian narratives, which culminated in the 1930s Saya San rebellion.

Furthermore, Buddhism’s historical decline and Islam’s subsequent dominance in parts of Asia combined with misinterpretation of the “786” symbol — representing the Islamic Bismillah phrase and denoting Muslim ownership, as seen in Muslim establishments — gave rise to a certain narrative in Myanmar: That Islam might be Buddhism’s nemesis and that the 21st century will be a decisive juncture in Buddhism’s prophesied destruction.

Compounding the millenarian beliefs is an acute sense of demographic besiegement. Most Myanmarese are well aware that Myanmar borders the populous countries of China, India and Bangladesh, with a combined population of more than 2.7 billion. Also, unchecked immigration from China’s Yunnan province into Myanmar since the late 1980s has created tensions with an estimated two million illegal Chinese immigrants living in northern Myanmar.

And while the Rohingyas’ political elites claim otherwise, their status remains murky — in 1975, the Bangladeshi Ambassador to Yangon told his British counterpart that there were “upward to half million Bangalee (sic) trespassers in Arakan whom the Myanmarese had some right to reject”.

With the large-scale colonial-era influx of migrant labourers and functionaries from South Asia, resentment at the perceived economic dominance of Chinese and Indian businessmen, and the view of Myanmar being endowed with resources, it takes little imagination to construct a narrative where these three populous countries are scheming to swallow up the country through demographic pressure.

And within Rakhine state itself, the Buddhist Arakanese have an acute sense of political, cultural, historical, economic, demographic and religious besiegement from the Bamar (the main ethnic group in Myanmar) and Bangladesh, causing many to be extremely prejudiced against both Muslims and non-Arakanese Buddhists.

As coverage of Myanmar’s religious violence proliferated, there is a growing perception within Myanmar that the international community and media concern themselves only with the Rohingyas’ version of events while neglecting the Myanmarese Buddhist perspective, save perhaps the spotlight given to the monk Ashin Wirathu and the 969 Movement, which he represents. Even then, it is done primarily to discredit Myanmarese views.

The way a selection of foreign commentators summarily dismiss what the Myanmarese Buddhist see as legitimate concerns has given rise to a new sense of besiegement and antipathy towards the international media, fuelling an equally dismissive view within Myanmar, where international reports of the violence and the Rohingyas’ plight are seen as over-sensationalised propaganda.

The manner in which some coverage has tarred Myanmarese Buddhism and nationalism with the same brush as the chauvinistic 969 Movement has also prompted moderate Myanmarese, who disagree with the chauvinistic vitriol, to be defensive against external critique, hampering domestic debate on how to solve the Rohingya issue.

And while the former junta remains widely reviled, its defiance of international pressure has instilled among ordinary Myanmarese the notion that Myanmar need not bow to external pressure regarding the Rohingya issue.

Some commentators are quick to dismiss the Buddhist siege mentality as based solely on overhyped paranoia or as the Myanmarese military’s creation to cement its praetorian role in politics. But dismissing the siege mentality and offering simplified portrayals of the sectarian violence only serve to misdiagnose the root causes and make a viable solution more elusive.

A more nuanced understanding and approach to the situation is needed, as the issue is more complicated than what is portrayed by the over-simplified narratives regurgitated incessantly within and outside Myanmar.

The analysis of the entire issue needs to incorporate other components such as endemic poverty, polarised grassroots media, geopolitical competition, historical issues and political elites on both sides exploiting the propaganda potential of the situation. It should also take account of Myanmar’s changing civil society landscape and self-serving actions by external actors.

Needless to say, the Myanmar government also has to be decisive in tackling hate speech, demonstrate police impartiality, address the lack of training and equipment by law enforcement agencies, enforcing the rule of law and ensure the security of all inhabitants regardless of race, creed or citizenship status.

In order to solve such a complex and complicated problem, all its components and nuances must be recognised and taken into account.

Kyaw San Wai, a Myanmar national, is a Senior Analyst at the S Rajaratnam School of International Studies, Nanyang Technological University. His research focus is on Burmese politics, political Buddhism, Southeast Asian affairs and biosecurity. This is an excerpt of a longer piece.