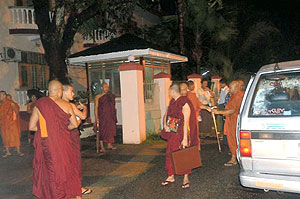 The religious dispute came to the head on Tuesday when police, officials from Religious Affairs Ministry and some 250 monks from Yangon Sangha Nayaka Committee raided and shut down the monastery, run by abbot the venerable Penang Sayadaw.

The authorities took some 20 monks into custody.

The remaining five detainees, including the abbot’s disciple English national Sayadaw U Ottara, have been charged for religious offence under Section 295 (a) 20/90 of the Penal Code.

“Monks have to disrobe themselves if they are tried. I don’t know where they are being held. Fifteen were released after questioning. We have to charge the remaining five. We do not want to harm both sides – the State Sangha Maha Nayaka Committee (the ruling body for Buddhist monks) and the detained monks. We are obliged to carry out the order of the ruling committee,” said Sein Maw.

After witnessing the trial at Tamwe Township Court, a monk U Pamaukkha said: “I asked the court officials whether they were being tried as monks or laymen. I was told they were brought to court after being disrobed. The trial will resume June 20.”

A monk, U Pamaukkha, who visited the trial at Tamwe Township Court said:

“I want to demand that they should be unconditionally released. I also want to urge those Buddhism followers to work together (in securing the release),” said the monk.

The five monks were charged for religious offence even though director Tun Nyunt from the ministry had given assurance on Wednesday that the case would be handled by a highest level body formed by SSMNC.

“Similar cases had been filed in our office and no one was arrested by our office,” said an officer from Tamwe Township police station. “Now, SSMNC has directly filed a lawsuit at the court. Police involvement in the raid was aimed at preventing conflict. Charging five monks after disrobing them is just an alleged report.”

Some people recall that the incident is similar to what happened in 1999 and 2007 under the junta. Some well-educated Buddhist monks were forced to disrobe and put in prison for their anti-government protests.

Meanwhile, public criticism has spread that charging and defrocking the monks without the knowledge of their relatives and giving them no chance to consult with lawyers is tantamount to tampering with the judicial system.

“Any Buddhist monk could be defrocked and sued if they clashed with the government or the SSMNC,” said U Pamaukkha.

The monastery raid occurred when the abbot was on a five-day trip to Japan which began on June 5. The three-storey monastery building was under the care of two monks – U Panyeinda and U Oattara.

The abbot has been disputing with the SSMNC over the ownership of the monastery for more than a decade. The ministry reportedly backs the SSMNC, leading to the raid.

Following the ministry’s press conference on Wednesday, the monks were disrobed and charged.