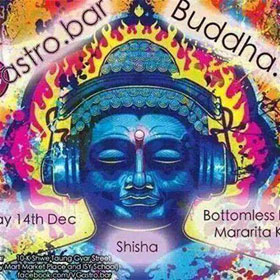 New Zealand native Philip Blackwood, 32, has been accused of "insulting religion" after he posted a psychedelic image of the Buddha wearing headphones on Facebook to advertise the V Gastro Bar.

Despite removing the image and replacing it with a statement apologizing for "embarrassing ignorance," Blackwood was arrested on December 10 along with nightspot owner Tun Thurein, 40, and co-worker Htut Ko Ko Lwin, 26.

The V Gastro Bar was shut just two weeks after its launch in an upscale Yangon neighborhood.

"This is insulting Myanmar, Buddhism and 500 millions Buddhists around the globe," Facebook user Htet Naing Win responded to the bar's post, using more moderate language than some.

The case comes amid a surge in Buddhist nationalism in Myanmar — which emerged in 2011 from half a century of military rule and global isolation. A powerful group of monks who fear Buddhist culture in Myanmar is under threat has emerged and is promoting restrictive and controversial laws aimed at "the protection of race and religion".

Blackwood is being held in Myanmar's notorious Insein prison where he is potentially facing a four-year jail term. Lawyers predict the trial will stretch for months.

The case has been condemned by Human Rights Watch and Amnesty International. It adds to concerns that Myanmar's nominally civilian government is backsliding on rights reforms. It also illustrates the increasingly powerful influence on law and politics of the hardline nationalist monks.

Violence relating to a rise in religious tensions has claimed the lives of more than 240 people, mainly Muslims, in Myanmar since 2012 and actions deemed to offend Buddhist sensitivity are flashpoints.

As telecommunications in the developing country expand, social media is providing an increasingly powerful platform for those intent on promoting intolerance.

In July, Myanmar government's revealed it had been in contact with Facebook representatives seeking advice on curbing online hate-speech amid fears it had fueled religious violence in the country's second-largest city Mandalay earlier that month.

So sensitive are religious issues in Myanmar just now that Blackwood was initially unable to find a lawyer willing to represent him. Riot police have been drafted in for the trio's court appearances as supporters of the Buddhist nationalist 969 movement gathered outside.

The lawyer who eventually agreed to take on the New Zealander's case, Mya Thway has said he had since received anonymous messages on Facebook threatening to "cut him to pieces and burn him" for doing so.

While the psychedelic Buddha image, or ones like it, are a familiar enough sight adorning T-shirts in the tourist areas of neighbouring Thailand, the insensitivity of using a sacred symbol to promote a bar in Myanmar has been widely recognized within the country. But outside Myanmar, many have reacted with surprise to the degree of anger the case has provoked.

"It can be difficult to make sense of Burmese Buddhist reactions to this case, which many people perceive as over-reactions," said Matthew Walton, Aung San Suu Kyi Senior Research Fellow in modern Burmese studies at St Antony's College, Oxford.

Walton described the use of the image as "both a bad business move and a culturally insensitive advertising effort that was at a minimum disrespectful to local Buddhists' tradition but in the context of an emboldened Buddhist nationalist movement, an incredibly stupid and damaging act."

Blackwood's case is believed to be a first in terms of a Westerner facing legal action relating to current religious sensitivities, but according to Walton it remains unclear whether the case heralds a wider rise in intolerance towards perceived Western threats to Buddhism.

He added: "I do want to emphasize that I personally think an extended prison term would be excessive, but I also imagine that there's an interest in making an example of the defendants, so as to establish how seriously the Myanmar government will take insults to Buddhism."

David Mathieson, Human Rights Watch's senior researcher on Myanmar, described the case as "very disturbing." He cited it as part of an "escalation in a pattern of rising Burmese and Buddhist ultra-nationalism, anti-Muslim fervor, and creeping xenophobia."

The main target of the Buddhist nationalist movement has been the country's Muslims, who make up about 5 percent of its 53 million people.

Blackwood has pleaded not guilty to two charges relating to insulting religion, and a third charge of disobeying an order issued by a public servant. The father of a 4-month-old child insists he did not mean to offend or insult anyone but remains behind bars.

"I believe the law says the act must be deliberate, require malice with intent to offend," Blackwood told the court on Dec. 26. "I have said a number of times, there was no intent."

Concern over incitement to violence via social media, have led to the launch of a movement aimed at addressing the issue. The Flower Speech campaign — or "Panzagar" in Burmese — was started by Nay Phone Latt, a blogger and activist who was imprisoned between 2008 and 2012 for his online writings about the country's then-military rulers.

The organization aims to promote responsible use of social media, while upholding the principles of free-speech, long oppressed in Myanmar.

While Nay Phone Latt, who featured on TIME's list of the world's most influential people in 2010, said he didn't believe Blackwood and his co-defendants should be jailed but added that he didn't agree with their Facebook post.

"It is difficult to stand on their side," Nay Phone Latt said. "Every religion has to respect others if we want to stay together peacefully. I am a Buddhist and liberal thinking, but I don't like that kind of thing — it's wrong to use an image of the Buddha in that way."