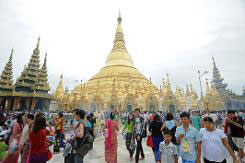 Rangoon is being held in response to calls for Myanmar to provide aid to the migrants and address the root causes of an exodus from its shores as well as neighbouring Bangladesh.

"We will protest against some foreign countries trying to pressure (Myanmar) to accept refugees as if they are from our country although they are boat people from Bangladesh," said Pamaukkha, a Buddhist monk activist who goes by one name and is part of the group organising the protest.

A migrant crisis has gripped Southeast Asia for weeks as more than 3,500 Bangladeshi economic migrants and stateless Rohingya Muslims from Myanmar arrive on Thai, Malaysian and Indonesian soil.

Thousands more are still thought to be stranded in open waters with diminishing supplies of food and water after a crackdown in southern Thailand fractured a vast human trafficking network.

Myanmar's navy found exhausted and hungry men and boys, mainly thought to be from Bangladesh, crammed in the rusting hull of a smugglers' boat in waters off its coast last week.

They have been held in a border region of western Rakhine state, where Muslim Rohingya live in abject conditions after 2012 communal violence that left the region deeply segregated and sparked a deadly wave of anti-Muslim attacks.

But the mission to help the group has stirred outrage among Buddhist nationalists, who have been increasingly prominent in Myanmar in recent years.

"We do not want anyone here posing as refugees or Bengalis, trying to swallow the nation or its people. They need to be sent back now," said Pamaukkha.

Myanmar's roughly 1.3 million Rohingya Muslims are largely seen as illegal immigrants from Bangladesh and referred to as 'Bengali', despite many tracing their ancestry in the country back for generations.

They have left Rakhine in droves to escape years of restrictions limiting their access to employment, basic services like education and healthcare and even family size.

Deadly bloodshed between local Buddhists and Rohingya in Rakhine three years ago dramatically worsened the situation, leaving around 140,000 homeless and trapped in bleak camps.

The recent boat crisis has done little to soften the stance of hardline nationalists, including several monastic organisations who have championed a raft of legislation seen as targeting women and minority Muslims across the country.