YANGON, Myanmar -- UN Secretary General Ban Ki-moon hit out Monday at "extreme elements" in Myanmar who are sowing hate speech and bigotry towards religious minorities, days before the country votes in landmark elections. 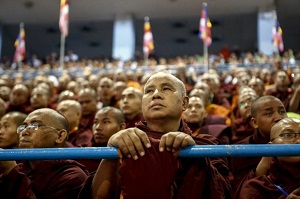 Myanmar heads to the polls next Sunday in what observers are hoping will be the fairest election for decades as the nation slowly shakes off almost a half-century of brutal military rule.

But the vote is taking place against a rising tide of anti-Muslim sentiment, spear-headed by a small but increasingly influential movement of hardline Buddhist nationalist monks.

In a statement put out by his office, Secretary-General Ban Ki-moon said he had "deep concern" about "the continuous resort to hate speech, the incitement of communal animosities and the abuse of religion for political purposes resorted to by extreme elements among the majority community in Myanmar".

Mr Ban also called on voters to reject politicians who espoused discriminatory policies when they went to the ballot box.

"He urges all concerned in Myanmar to eschew any kind of pressure, intimidation, dissemination of hatred or violence against individuals or organizations based on their ethnic identity, gender, religious persuasion or political views," the statement said.

The UN chief did not name any person or group in his remarks.

However he did hit out at "vulgar remarks" directed against Yanghee Lee, the UN's special rapporteur for Myanmar.

During a visit to the country in January she was rounded upon by influential firebrand monk Wirathu who described her as a "whore".

It was not clear from Mr Ban's statement whether he was referring to that specific event.

Ms Lee has been vocal in her criticism of those who persecute and sow sectarian animosity towards Myanmar's minorities, particularly its Muslim population.

In recent years a nascent Buddhist nationalist movement has sprung up, throwing its weight behind the ruling USDP party.

The so-called Ma Ba Tha movement and Wirathu are the best known among these groups, espousing virulently anti-Muslim sentiment.

Dozens of people, mainly Muslim, have died in religious violence over the last few years.

The USDP has aligned itself with this conservative view, agreeing to pass a series of controversial race and religion laws earlier this year.

As a result, the Buddhist nationalists have made it clear the incumbent government is their favourite choice.