RANGOON, Burma -- In both Myanmar and abroad, the National League for Democracy’s landslide election win is seen as a victory of the people over the military and its ruling political elite. 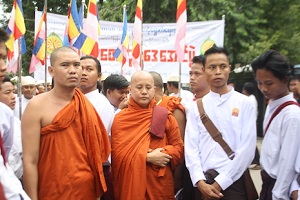 << Ashin Wirathu, an influential hard-line monk from Myanmar's Ma Ba Tha movement, is seen during a rally supporting the legislation of race and religion laws in Mandalay on Sept 21.

It’s a price the army had to pay after subjecting the population to decades of repression. The public’s message was a clear call for democratic change, a mandate for which was given first and foremost to NLD leader Aung San Suu Kyi.

Yet the crushing defeat of the military-backed governing Union Solidarity and Development Party (USDP) also signals another message; it was an outright dismissal of the extremist nationalist “Buddhist” movement called Ma Ba Tha.

It had been whipping up nationalism and anti-Muslim sentiment. In the run-up to the elections the group—which enjoyed the support of President Thein Sein’s government—launched relentless campaigns against the NLD and Suu Kyi, while endorsing the USDP.

Authorities looked the other way as the monks concocted a toxic mix of religion and politics, acts that directly violate the Constitution.

The monks pointed out that Suu Kyi had a foreign spouse and that her NLD party objected to Ma Ba Tha’s four “race and religion” laws. They spread fear among the public, saying that the Buddhist majority nation of Burma was under threat of Islamists.

What Burma needed, they lectured the people, is a second-term Thein Sein government that would protect the country’s race and religion. “One good turn deserves another is one of the Buddhist principles,” wrote Tilokabivamsa, a monk who is Ma Ba Tha’s supreme leader, in a commentary in September.

In tandem with the monks, some USDP candidates also claimed during the election campaign that they would promote Buddhism if they were elected. In an apparent attempt to capture nationalist voters reluctant to support the USDP, Nay Zin Latt, a former political advisor of Thein Sein, established the purely nationalist National Development Party just a few months before the elections.

Ma Ba Tha was highly visible through organizing dozens of rallies and sermons, and the public treated them with the respect traditionally granted to clergymen.

Given these developments, some assumed the NLD might struggle to win a majority great enough to form a government. However, the public’s deep-seated hatred of the military establishment is far stronger than any latent anti-Muslim sentiment.

The USDP won just a very small percentage of legislative seats in the elections while the NDP got zero, as did other political parties with nationalist agendas such as the National Democratic Force, the Myanmar Farmers Development Party and the Peace and Diversity Party.

Even in the Irrawaddy delta, where the nationalist monks seemed to enjoy the strongest public and government support, the NLD walked away with almost all legislative seats.

Does this result disprove the numerous reports over heightened Buddhist nationalism in the country that have appeared since the 2012 Arakan State crisis and the 2013 communal riots that marred central Burma? To a large extent, yes.

Many ordinary people in Burma had begun to suspect in recent years that sectarian violence and the rising tide of Buddhist nationalism had all to do with politics. They found that anti-Muslim sentiment became almost synonymous with being anti-NLD or anti-Suu Kyi, and that authorities failed to take actions against individuals spreading such messages.

Ma Ba Tha and their extreme positions were also increasingly being viewed as incompatible with fundamental teachings of Buddhism. Their image further declined when the public witnessed them campaign for former generals who have committed human rights violations.

Due to the strong traditional veneration of monks, very few dared to stand up against Ma Ba Tha out of fear that they would be portrayed as pro-Muslim. There was also the risk that those who did could be jailed, like the former NLD official Htin Lin Oo, who is serving a two-year jail sentence for criticizing the movement.

When given a chance to express their beliefs through a ballot, however, people voted en masse for an NLD-led change and against nationalist Buddhism.

Whether the Rohingya should be recognized as citizens or not will remain a highly contentious issue; the group remains widely disliked and viewed as illegal immigrants from Bangladesh. The NLD has also shown its not-so-principled stand by bowing to Ma Ba Tha pressure and refraining from fielding any Muslim candidate. The new Parliament will not have a single Muslim representative.

Asked if he was surprised by the USDP loss, Thurein Soe, a leading Ma Ba Tha official in Rangoon responded that, “It is difficult to save someone who is on the verge of death.”

For now, the Ma Ba Tha monks have publicly welcomed the NLD victory but warned that they would not remain silent if Suu Kyi’s new government tries to repeal the race and religion laws or amend the controversial 1982 Citizenship Law, which stripped Rohingya from their citizenship rights.