Sula pagoda given a golden facelift

Yangon, Myanmar -- TEETERING on bamboo scaffolding, craftsmen are busy attaching blocks of gold to a Buddhist pagoda in downtown Yangon, Myanmar, burnishing one of the city’s major landmarks and racking up spiritual credit for devotees. 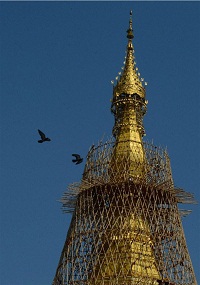 << In this photo taken on March 5, 2016, expert craftsmen teetering on bamboo scaffolding attach blocks of gold to a Buddhist pagoda in downtown Yangon. The five-yearly renovation of the Sule Pagoda has seen the monument shed its weather-damaged frontage, re-clad in several hundred solid gold plates -- each costing around 1,100 USD -- and thousands of squares of gold leaf.

The five-yearly renovation at the Sule Pagoda sees the monument shed its weather-damaged frontage. It is re-clad in several hundred solid gold plates — each costing about US$1,100 — and thousands of squares of gold leaf.

The cost is significant in the impoverished Southeast Asian nation, but for devout Buddhists, donations to pagodas — as well as monasteries and charitable causes — are an essential way to make “merit,” a sort of credit for pious living.

“This is our spiritual belief that people worship at the pagoda, wishing for the best for their future, their family,” said Aye, a Sule trustee board member, who like many Burmese goes by one name.

The regilding, which began in December, is due to be completed by the end of this month.

Sule sits at the heart of Yangon’s bustling downtown, which was designed under British colonial rule.

In a testament to the multicultural nature of the city, the pagoda is within sight of both a church and a mosque, as well as the city hall.

Sule is one of Yangon’s most famous temples, second only to Shwedagon Pagoda and its towering peak that soars over barefoot devotees.

Gold itself has long had a crucial role in Myanmar.