YANGON, Myanmar -- Around 100 Buddhist monks and nationalists in Myanmar staged a protest against Thailand on Friday, denouncing the government of the neighboring country for its actions against a temple that has defied orders to hand over a wanted monk. 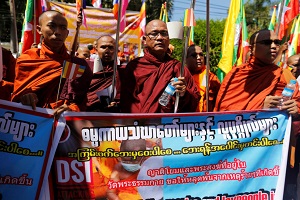 << Buddhist monks and activist from Myanmar protest against the Thai government's crackdown of Dhammakaya temple in front of the Thai Embassy in Yangon, Myanmar February 24, 2017. REUTERS/Soe Zeya Tun Reuters

For the past week, Thai police and soldiers have surrounded the Dhammakaya temple outside the capital, Bangkok, to try to bring in the former head abbot who is wanted on money-laundering charges, but their efforts have been frustrated by devotees.

The challenge from the temple is one of the biggest to Thailand's military rulers since a 2014 coup. Dhammakaya has been trying to encourage supporters abroad to protest against the government's actions and use of an emergency law.

"We suffered because our neighboring Buddhist people were undermined, so we cannot stay silent," said protest leader Tin Htut Zaw.

The protesters had delivered a letter to the embassy calling on Thailand to stop its "insulting" actions against the Buddhist temple, he said.

A spokesman for Thailand's Department for Special Investigations said the law and order operation was being carried out in a manner respectful to Buddhism.

U Thuseikta, secretary of the Patriotic Monks Union, said the United Nations, the 10-member Association of Southeast Asian Nations and human rights groups should help protect Thai Buddhists from their government.

Many of the same demonstrators, including U Thuseikta, staged a small protest against a Malaysian ship delivering aid for Myanmar's Rohingya Muslim minority on Feb. 9.

Buddhist nationalists in Myanmar reject the label Rohingya, referring instead to the more than 1 million people living in Rakhine state as "Bengalis", to suggest they are interlopers from Bangladesh.

U Wirathu, a prominent member of a nationwide nationalist network known as Ma Ba Tha, also led a demonstration on Thursday in Myanmar's central city of Mandalay over the Thai government crackdown, his Facebook page showed.
TOP