YANGON, Myanmar -- Hardline nationalist group Ma Ba Tha has been ordered to cease all activities by the middle of July or face legal action, after a decision by senior clerical leaders. 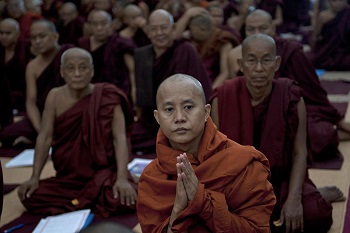 According to a statement released by the committee Tuesday afternoon, no individual or group will be permitted to operate under the Ma Ba Tha banner.

The group, also known by its English title the "Association for the Protection of Race and Religion", has also been instructed to take down any posters and signboards related to the group by July 15.

The Sangha committee warned it would refer any breach of the edict to the Ministry of Home Affairs for “immediate” prosecution.

The committee’s statement said Ma Ba Tha’s representatives had pledged to “obey [those decisions] exactly and inform other monks” affiliated with the group.

Ma Ba Tha had been making plans to hold its fourth anniversary conference later this week at the association’s headquarters in Insein.

The anniversary event has now been officially cancelled but a “special conference” will be held in its stead, according to a Facebook post by Ma Ba Tha executive member Ashin Sopaka.

The Sangha committee’s formal ban comes amid increasing tension between the government and prominent members of the nationalist cause, following a tense confrontation between activists and local residents in Yangon’s Mingalar Taung Nyunt earlier this month, and the jailing of some nationalist leaders.

Last year, following a dispute sparked by Yangon Chief Minister U Phyo Min Thein characterising Ma Ba Tha as “not necessary” to the nation’s development, the Sangha committee responded to protest threats by announcing that the group was not an official Buddhist organisation.

In recent weeks prominent Ma Ba Tha leader U Wirathu was issued with a ban on public preaching after a series of anti-Muslim speeches. In the time since, he has made a number of provocative public appearances with his mouth taped shut to symbolise his silencing by clerical authorities.

Recent events suggest Ma Ba Tha may have had prior warning of the decision, and sources have suggested a number of closed-door meetings between the Sangha committee and Ma Ba Tha leaders have taken place in the last week.

On May 17, while pledging to initiate defamation proceedings against its critics, Ma Ba Tha announced the formation of the Dhamma Vansanurakhitta Association as a new grouping for lay supporters of the association.

Following a protest on Saturday calling for Religious Affairs Minister Thura U Aung Ko to resign - for what nationalist hardliners claim is the minister’s bias towards Myanmar’s Muslim community - Ma Ba Tha quickly issued a statement to deny its members were involved in organising the rally.
TOP