Yangon, Myanmar -- Myanmar’s most revered Buddhist leader gave a speech on Monday in which he urged hundreds of military officers to not to fear the sinfulness of taking human life. Despite building a reputation on his interfaith and humanitarian activities, Sitagu Sayadaw has long made excuses for the military’s abuses against Rohingya Muslims. This week, critics said the monk veered into promoting genocide. 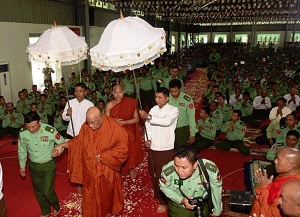 During his speech, which was delivered at a military base in Kayin State and broadcast live in Myanmar to over 250,000 viewers, Sitagu Sayadaw shared a parable about an ancient Sri Lankan king who was assured by Buddhist clerics that the countless Hindus he had killed only added up to one and a half lives.

“Don’t worry King, it’s a little bit of sin. Don’t worry,” Sitagu Sayadaw said. “Even though you killed millions of people, they were only one and a half real human beings.”

The monk distanced himself from the characters in the story, saying: “I’m not saying that, monks from Sri Lanka said that.” But he then added: “Our soldiers should bear [this story] in mind.”

The monk’s support for Myanmar’s government and military in the face of international accusations of ethnic cleansing against the Rohingya have compounded the public admiration he has enjoyed for years. Earlier this year, he was awarded the title “Honorable, Excellent, and Great Teacher of Country and State” by the government of Aung San Suu Kyi.

But Sitagu Sayadaw’s stature and erudition have not been enough to protect him from the ire of some Myanmar Buddhists, who believe his coziness with the military is drawing him away from the principles of Buddhism.

“This was a shocking speech,” said Thet Swe Win, director of the Centre for Youth and Social Harmony, an interfaith organization. “It was totally against the Buddhism I understood. Buddha teaches about love, kindness, and compassion to every human being, regardless of race and religion, and also teaches that killing is a sin. But this speech said killing non-Buddhist people is not a sin.”

He went on: “It’s like mixing up religion up with the army. It’s kind of saying the army is here to protect race and religion, and it encourages them to kill people from different religions. I condemn this kind of speech.”

Thet Swe Win compared the message of Sitagu Sayadaw’s speech to the doctrines of the so-called Islamic State.

“ISIS also says killing non-Muslims is not a sin.”

Khin Zaw Win, director of the policy think-tank Tampadipa Institute, made similar comparisons in his reaction to the speech, which he shared on Facebook.

“It’s utterly irresponsible of a senior monk to preach such things. It reminds me of bishops who fought in the Crusades and the medieval practice of selling indulgences and absolution.”

In another post, he said: “It’s sad, but there might soon be a Burmese equivalent of ‘Sieg Heil!’ What happened to democracy?”
TOP