Yangon, Myanmar -- Religious Affairs and Culture Minister U Aung Ko has urged the nation’s highest religious authority to take action against monks who disgrace Buddhism through their activities or speech. 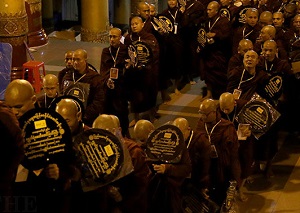 The State Sangha Maha Nayaka Committee (known by its Burmese acronym Ma Ha Na) held its annual meeting on Wednesday in Yangon. The meeting was attended by all 47 of the senior Buddhist monks who sit on the committee, as well as the minister and other senior government officials.

Problems with bogus monks harassing passersby for money and reports of monks engaging in gambling have become increasingly common recently.

In his request to the council, U Aung Ko said some monks showed a lack of respect toward the religion while abusing the goodwill of the laymen who support them.

“Their actions not only damage the dignity of their fellow monks, but also threaten the existence of Buddhism,” the minister said.

He called on the senior clergy to collaborate with administrative bodies to enforce the authority’s directive No. 72.
The directive lists basic rules of behavior for monks, such as not asking for donations in the afternoon, or engaging in entertainment or commercial activities.

The chairman of the committee, Bhaddanta Kumara Bhivamsa, said at the meeting that religious laws needed to be more stringently enforced to address a decline in the morality of monks.

Ma Ha Na was set up by the government as a governing body for the country’s monks. The government appoints senior monks to enforce the rules governing monks’ behavior. Under the law, Ma Ha Na is the only agency with the authority to take action against monks. Ma Ha Na must give its consent before civilian authorities can arrest them, for example.

Last year, the committee banned nationalist monk U Wirathu from preaching for one year for spreading hate speech that it said could lead to religious conflict.

The ban expires next month.

Some 87 percent of Myanmar’s more than 50 million citizens are Buddhist. According to the Ministry of Religious Affairs and Culture, there are more than 500,000 Buddhist monks in the country.
TOP