From Ruins to Ruined

Myanmar's regime is obliterating a cultural treasure as it `rebuilds' ancient temples to bring in tourists. Experts are aghast -- and uninvited.

BAGAN, Myanmar -- The bricklayers are paid $1.35 a day to rebuild the ancient ruin: a small, 13th century temple reduced by time to little more than its foundation. 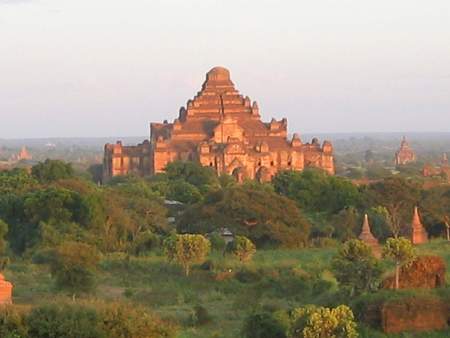 << The ancient Bagan complex in under threat

Myanmar, also known as Burma, is ruled by a military government that has been cut off from the West for more than a decade because of its brutality toward its people. Since 1988, the generals who run the country have killed thousands of democracy activists and imprisoned thousands more. Opposition leader Aung San Suu Kyi, a Nobel Peace Prize laureate, has been detained for nearly 11 of the last 17 years.

Myanmar is advertised to tourists as the Land of Golden Pagodas. Bagan's largest temples rival the cathedrals of Europe in size and age, but rather than being scattered across a continent, they are concentrated in an area about the size of Santa Monica.

By some estimates, there were as many as 13,000 temples here during Bagan's peak in the 13th century. Today, the Bagan cultural heritage zone has more than 2,200 temples, along with 2,000 unidentifiable mounds and ruins.

Scattered among the large monuments are temples as small as a one-room hut, often with a statue of Buddha inside, and squat, circular pagodas with a conical stupa on top and no entryway.

Many of the temples were damaged by a major earthquake in 1975. The military government at the time accepted international assistance, and experts from around the world spent years restoring some of the most important temples. Major temples restored after the quake remain in good condition.

But after a new clique of generals came to power in 1988, interest in upholding international standards for historic preservation vanished. The regime rejected offers of continued foreign assistance and eventually dropped its plan to seek Bagan's designation as a World Heritage site, leaving one of the world's premier archeological sites without U.N.-protected status.

The government decided instead that turning Bagan, also known as Pagan, into a tourist destination could bring much-needed foreign cash. The generals set about making the archeological zone more appealing to visitors, particularly tourists from neighboring countries such as China and Thailand that are not so critical of the military government. Few Western visitors come to Bagan because of calls by the opposition for a tourist boycott.

One of the regime's first steps was to uproot all 3,000 residents who lived within Old Bagan's historic walls and move them to New Bagan a few miles south.

"We were very angry," said one man who was 15 when his family had to pick up and move its small wooden house. "The older people were very sad. We had been there many generations."

Where the homes used to be, the government began building hotels and restaurants. Much of the work was done with forced labor, a form of exploitation for which the regime is notorious.

As in every aspect of society here, decisions on historic preservation are made by generals with no special expertise or training. Government archeologists say privately they have no choice but to go along.

"If we disagree," one said, "they will send us to prison."