All that glitters is not gold in Myanmar's political landscape

Amid Bagan's historic gilded steeples stand newer imposters thrown up in a government effort to fuel tourism despite international sanctions.

Bagan, Myanmar -- My body was already a waterfall, and it was only 10:15 a.m. in the oven of Bagan, former imperial capital of Myanmar. Standing on the pedals of my rented one-speed girl's bike with a leopard-print seat, I dripped up an incline, passed a couple of bullocks on death's door pulling an ancient wooden cart and then swerved off the asphalt into sand as an air-conditioned bus filled with grinning foreign tourists blew by. 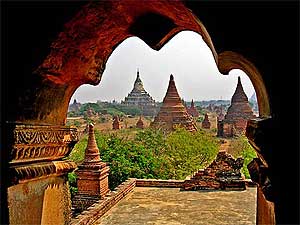 << Spires dot Bagan's landscape, and more are going up all the time -- Myanmar's ruling military junta has thrown steeples onto topless monuments and rebuilt fallen structures. International archaeologists and art experts are horrified, but the target audience is the tourists who come in spite of a boycott intended to undermine the regime.
(Joe Robinson)

The backdraft stirred up a storm of dry-season dust, and as it settled, I could make out a surreal spectacle from the top of the rise: a sea of otherworldly steeples dancing in the heat waves -- some conical, others topped with doughnut-shaped rings, some with glinting golden umbrellas, some sculpted into immense bells. Despite the heat, it was not a mirage. The sci-fi skyline is the legacy of a mysterious building boom that turned this central Burmese savanna astride the Irrawaddy River into one of Asia's most sprawling but least-known extravaganzas of religious architecture.

Angkor Wat, the famed Cambodian monument that has a shared Hindu and Buddhist past, contains 200 temples. Bagan, formerly known as Pagan, boasts 2,217 Buddhist temples and monuments, and once had more than 4,000 sites. Strewn across a couple of dozen square miles, this forest of brick and stone towers was triggered by a templemania that reigned from the 11th to 13th centuries, when Bagan was the capital of the Burmese empire. Sacred edifices went up by the hundreds, housing giant Buddhas and wall and ceiling murals the likes of which would not be seen until the Sistine Chapel.

I rode through the maze of devotion, hoping to understand the compulsion behind the building spree. On my journey, I would also encounter more recent construction, part of a controversial restoration campaign by the military government of Myanmar, known as Burma until the regime renamed it in 1989. The rehab is designed to fuel tourism, particularly from China.

UNESCO and archaeological experts have denounced the government's rebuilding of ancient sites, and the construction of a mammoth 197-foot viewing tower that has been open for two years and an upscale resort in the middle of Bagan's antiquities.

Not that Myanmar's State Peace and Development Council -- the latest incarnation of a junta that has sealed the nation off from the rest of the world for the last 44 years -- is going to lose sleep over some old bricks. Although a world pariah for its gulag of political prisoners, bloody campaigns against ethnic minorities, suppression of pro-democracy demonstrators in 1988, and for keeping Nobel Peace Prize laureate Aung San Suu Kyi, elected president of the nation, under house arrest on and off since 1989, the regime isn't deterred by public censure.

Or boycotts. International trade sanctions and a tourist boycott designed to restore democracy have kept Western products and many travelers out of Myanmar. But trade is flourishing with China and non-boycotting Asian nations, making the sanctions moot. Some supporters of Suu Kyi, who endorses the boycott, charge that anyone who travels to Myanmar funds the generals. Others argue that tourism helps job-starved Burmese -- taxi drivers, food stall operators, postcard hawkers and artisans. As one guide told me, "If sanctions were 100% honored, I would say stay home, but since they're not, tell your friends to come. We need jobs."

I considered the arguments and decided to go last year, steering clear of government hotels and viewing towers. Boycotts almost always hurt the little guy and seal off societies from outside eyes.

ON A TEMPLE SAFARI

Across the road, I spotted a staircase leading up the rickety bricks of the Somingyi temple and headed over for a scenic outlook. As I reached the stairs, a young man in a checked-green longyi, the traditional wrap-around sarong worn by most men here, pulled up on a motorcycle and introduced himself.

I should have known the drill after a shoeless week at Buddhist sites around the country. All temple visitors must go barefoot anywhere on the premises, even the roof. It's a sign of respect.

From the second-floor terrace the scene was surprisingly African -- sporadic acacia trees, scrubby amber grass -- except the big game here is spires. Dozens of temples and bell-shaped towers called zedis, ranging from 30 feet to 200 feet high, point to the heavens like ancient missiles. Zedis, the most evocative symbol of Myanmar, dominate town and village landscapes and loom above farmland.

The profusion of temples and maroon-robed monks adds to the exotica of a land whose government-enforced isolation has made it a time warp of the Asia of decades ago. Bullocks pass for farm machinery. And the main transit system for ferrying goods is human -- on heads or bikes piled to gravity-defying heights.

But the government has moved fast to bring Bagan up to modern tourism standards. Too fast for UNESCO archaeological experts, who pulled out of Myanmar after the regime's methods put paintings inside Bagan's temples at risk. The government later abandoned the paintings. Without proper preservation, thousands of works of art are threatened, one Burmese expert who asked not to be identified told me. I saw priceless murals of life in the 12th century under attack by termites, which target the sugar used in the ancient plaster.

But the government has charged ahead with work on temple facades. It has grafted steeples onto topless monuments and rebuilt fallen structures without archaeological oversight.

Just behind Somingyi, I spotted a new edifice going up. The souvenir salesman and I wandered over to watch a crew rebuild a small cube temple leveled by an earthquake. The construction techniques look like what might have been used for the original temples here -- bamboo ladder and scaffold, a pot of lime for mortar and bricks a-flying. The hurler was a skinny young woman in a straw hat who in another land might have a future on the softball mound. In the wilting sun, she flung brick after brick to a worker 12 feet up.

I asked who was funding the job and was told, a private benefactor. Donors to Buddhist sites can win spiritual merit, a motivation that spurs contributions.

Were the kings who built Bagan buying their way to nirvana? The souvenir salesman didn't know, but he was ready to get out of the furnace. I took him up on an offer of tea at his family's home and pedaled off on a dusty path to his nearby village.

In a country that is 90% Buddhist, Bagan is a prime destination for the faithful, who arrive on jammed, decrepit mini-buses with pilgrims stacked on the roof like luggage. All Burmese try to visit the site at least once in their lives. The heart of the most revered temples is Old Bagan, home of the imperial capital, which was abandoned after it was overrun by the Mongols in the late 13th century.

Of the hundreds of spires suspended in the haze of Old Bagan, Ananda Pahto stands out. The day before my bike expedition, I explored the majestic whitewashed structure, topped by an ornate, gilded steeple. It was built in 1105 in the prime of temple construction, which exploded after the Bamar king Anawrahta defeated the southern Mon armies in 1057 and united most of modern-day Myanmar under his rule at Bagan.

Anawrahta went on a building tear, using the slave labor of conquered armies to raise Buddhist structures. Maybe that explains the proliferation of temples -- free labor. My guide that day didn't think so. He believed it was all about ego, a popular motive for the monumental works of ancient developers, from Egypt to Mayan realms.

"The kings tried to outdo each other and show their power," he said.

Bagan's smorgasbord of sacred architecture contains Shwezigon, an imposing golden mountain that is the Taj Mahal of zedis. As I emerged from a shaded arcade into the sunlight torching Shwezigon, the blast of gold from the temple was blinding. The conical dome glowed above three staggered terraces, with ledges striped in burgundy, altogether a marvel of symmetry and elegance. The structure was covered in gold leaf, re-rubbed on by hand in postage stamp-sized bits every four years.

The faithful padded clockwise in the Buddhist tradition around the gold pinnacle, stopping at shrines and altars to pray -- for happiness, health or good grades. A group of country girls dropped to kneel on the tile of an open-air temple. Lifting hands in prayer until thumbs touched foreheads, each bent forward to the ground in full prostration. Prayer is one of the few realms where Burmese are allowed to express themselves in this Orwellian land.

Atop the steep, Mayan-like Shwesandaw temple, still open to rooftop viewing (others have been closed to funnel people to the government tower), I took in one of the most haunting horizons in antiquity. Spires tickling the twilight in all directions celebrated a Buddhist message lost on centuries of leaders: freedom, through enlightenment, compassion and egolessness.

Back on the bike, I realized it was almost noon, "the time of silent feet," as George Orwell called it, when humans head for any scrap of shade to escape the barbecue. I followed my friend, the souvenir salesman, to a poor but tidy village where the homes are made traditionally from bamboo and girls pull pails of water by rope from cement wells.

I found his family under an awning etching lacquered bowls. Many families in the village are artisans -- in this case, the fourth generation of artists, said my friend's father, his teeth stained red by betel nut. A craftsman carved while four girls painted bowls. I asked them why there were so many temples in their backyard, but no one knew.

"It's a blessing," my friend said.

After a cooldown with this typically sweet Burmese family, I rode back into the broiler. I quickly bumped into one of the most beloved temples in Bagan -- Manuha Paya, a moldering structure named after the Mon king who was defeated and imprisoned by Anawrahta. According to legend, the Burmese ruler allowed Manuha to design his own temple, and the prisoner took advantage of it, creating a commentary on his captivity. Three giant seated Buddhas and a reclining statue are stuffed into cramped rooms, heads scraping the ceiling, shoulders jammed wall to wall.

I watched as a group of the faithful -- old men with shopping bags, mothers with children, pilgrims -- silently did devotions at the foot of a boxed-in Buddha. Perhaps some were offering what I was told is the most popular prayer at this temple, one that speaks to a Buddhist legacy more enduring than the architectural exploits of kings and generals: the wish for freedom.