Mandalay, Burma -- When Burmese monks protested in September 2007, the disciples and monks at Sayadaw Nyanissara’s monastery in the Sagaing hills near Mandalay exercised restraint and stayed away from the demonstrations, largely because of their respect for the work the activist monks were accomplishing throughout the country. 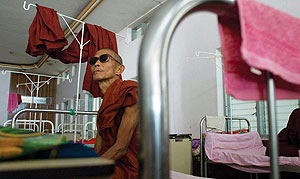 They also focused on the big picture. If their monastery became identified with the uprising, it could put their hospital and social work programs in jeopardy. The people needed their services.

Their work at Sitagu Ayudana Hospital continues today unabated, providing free medical care to anyone in Burma regardless of race or religion.

When the hospital was created in 1989 the intent was to serve the medical needs of the monks, nuns, novices and destitute people who live around Sagaing Hill, located about 45 miles west of Mandalay.

The hospital’s guiding principle is based on the Buddha’s words: “Whoever would attend me, should also tend the sick.”

While the monastery’s hospital provides general health services, it is also well-known for its eye-care clinic and is one of the few places in the country where people can receive free treatment provided by visiting eye specialists from Singapore, Japan, Malaysia, Britain and the United States.

Since the eye clinic opened in 1993, four years after the founding of the hospital, a constant stream of foreign ophthalmologists have volunteered their services, drawn by the charisma of 70-year-old Nyanissara, known reverently as Sitagu Sayadaw (sayadaw is a title for the abbot of a monastery).

“In Upper Burma, there are many people who suffer from eyes diseases that are curable,” says deputy medical superintendent Dr. Mimi Khin, who directs the eye-care program.

“Sitagu Sayadaw tries to restore patients’ eyesight and at the same time, give them a vision of the dhamma.”

Sitagu, a Burmese word derived from Pali, refers to “the moon that represents coolness.” It’s also the name of the Sitagu Monastery, which was founded in 1980 on Vesak Day, the full moon day in May that celebrates the birth, enlightenment and death of the Buddha.

The idea for a Buddhist teaching academy came after Sitagu Sayadaw visited a Christian nunnery in Belgium that operated a religious university.

Founded in 1994, the monastic academy offers undergraduate and graduate courses in Buddhist studies, as well as basic education classes for the young. At a grassroots level, a monastic education is often the only option for children in isolated villages where government schools simply don’t exist. In such monasteries, the curriculum is similar to that of government schools, in addition to basic Buddhist teachings. In the same year, Sitagu Sayadaw established a branch of his monastery in Austin, Texas, in the United States.

The monastery staff describe their efforts as missionary work without religious conversion. The goal is simply to make people better, taking shortcomings and converting them to virtues like compassion, kindness and charity.

As a monk, Ashin Nyanissara first came to Sagaing in 1968 to teach the Buddhist scriptures. In 1972, he left his monastery to practice solitary meditation in the jungle. Re-emerging in 1975, he began giving dhamma talks throughout Burma. Since then, he has taught in more than 40 countries and is now one of the most respected dhamma teachers in Burma.

Sagaing, which means “beginning of the bend,” is located on the Irrawaddy River and, according to legend, the Buddha visited the area in the twentieth year of his ministry some 2,600 years ago. The legend says 99 ogres who lived in the hills became his disciples and attained the first stage of enlightenment. To commemorate the occasion, his followers later built Zetawun pagoda to enshrine his lower robe. Today, the area is home to about 1,000 monasteries and more than 10,000 monks, nuns and novices.

Traditionally, Burmese monks and nuns did not take part in social work. It was Christian missionaries who brought the practice of running schools and hospitals to the country. Buddhist monks became involved in social work following the country’s independence.

One of Sitagu Sayadaw’s senior disciples said his teacher has never been motivated by specific causes. Instead, he seems to be driven by a determination not to waste time.

One of his first projects, begun in 1982, was to draw water from the Irrawaddy River through an extensive network of pumps and pipes to meet the demands of the monasteries, nunneries and villages in the area.

In Burma, monks and nuns are entitled to free treatment from state-run hospitals. But due to the scarcity of supplies, treatment is often impossible or insufficient. At Sitagu Ayudana Hospital, people of all faiths enjoy free services. Even those who can afford it are only charged for medicines. The hospital is funded entirely by donations.

The monthly cost of operating the hospital is around US $9,000. Today, the 100-bed hospital—located on 10 acres—has an occupancy rate of about 60 percent. In 2005, about 550 patients underwent general surgery and 900 eye patients received treatment through the hospital’s eye-care program.