Mandalay, Myanmar -- In Mandalay, the second city Myanmar, three very ancient Buddha statues have been found. According to a local resident source, the Buddha statues appeared in the Irrawaddy river two days ago. 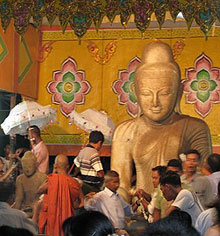 << Two statue of Buddhas can be seen, one is huge and the other is small

Unfortunately, one disappeared and only two of them have been saved. Their size and age are not mentioned yet, but one is said to be huge.

At the moment the two statues of Buddha are being honored by the people at the Yan Myo Lone Temple, 41 street in Mandalay city.

The Buddha represented by these statues is considered the holiest Buddha by Burmese people. He is called Paw Daw Mu. These photos are taken by a local resident.