The monks and I: Teaching and learning in Thailand

Bangkok, Thailand -- Foreigners are being invited to teach English to Buddhist monks at two temples in Thailand -- at a cost of hundreds of dollars.

<< Foreign teachers can expect to work six hours a day, but can spend the rest of their time absorbing Thai culture.

And staff at one temple claim that many visiting instructors "experienced nirvana temporarily" during meditation sessions.

Foreign teachers have to pay for their own lodging, food and other expenses, as well as their airfare to and from Thailand. And though all of the saffron-robed monk students are male, the temples welcome both men and women teachers.

"All English speakers are welcomed," said Dr. Barton "Bart" Yanathiro, a 75-year-old American Buddhist who helps run the classes in Ratchaburi, about two hours southwest from Bangkok by bus.

Dr. Yanathiro is the temple's secretary for international affairs and assists with the Immersion in Buddhist English Program. He also manages the Buddhist Meditation Institute, which teaches meditation in English, as part of the World Buddhist University.

Dr. Yanathiro said the abbot and several monks at the temple already speak English, and "a foreign professor monk" heads the teaching program.

"We began informally two years ago, but last year was our official opening," said Dr. Yanathiro. "We have had a total of 18 teachers and 85 registered students so far. Two teachers stayed long-term, but most came for one to two months.

When foreign instructors are not teaching the monks, they can study Buddhist Samatha-Vipassana meditation, in an English-language program led by Dr. Yanathiro.

"Numerous teacher volunteers have been able to meditate to experience nirvana, and get advice from Buddha or the Noble Disciples," he said. "This is an undreamed of, once-in-a-lifetime opportunity.

"Of 16 teachers since the very beginning, six experienced nirvana temporarily. An additional three transcended beyond this world to Dhammakaya, and another three more achieved trance states like heavenly bliss. The remaining four only attained inner peace." 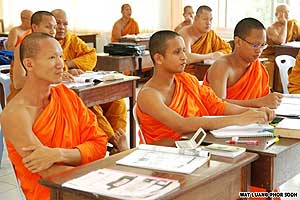 All of the monk students are male, but both temples welcome male and female teachers from abroad  >>

Asked about their purported temporary experience of nirvana, Dr. Yanathiro replied: "I am using the official definition, where one actually sees and communicates with Lord Buddha and his disciples.

"Most amazing is the personal instruction some have gotten directly from Buddha. One was taken to a volcano and told to jump in. When he did so he became one with the earth. In another meditation he became a tree. Another teacher-meditator experienced becoming a leaf on a tree which then fell to earth, decayed and became part of the earth.

"They see Buddha and the disciples. Communication is by direct telepathy, so language is irrelevant. One does get clear verbal communications, but more impressive are their descriptions of experiences such as feeling oneself becoming a tree."

None of the teachers reported any side effects from their trances.
'Hey, fat lady! You so beautiful!'

Foreigners who want to teach and study at the temple can register with Global Service Corps of San Francisco, via its website which offers classes lasting two weeks or longer.

Fees, described as "Service-Learning Program Contributions," start at US$1,480 for a two-week program and jump $415 dollars for each additional week, up to a 13-week program which costs a total of $6,045. After that, the weekly fee increases by $255.

The temple provides "a U.S.-style house across the street from the wat, which has two bedrooms for two people each. A cabin and separate dormitories for men and women, which are more spartan, are also available inside the temple," Dr. Yanathiro said. Thai cuisine, non-vegetarian and often spicy, is included.

An American woman, who taught at the temple, wrote in her "CHITARITA" blog in 2010 that shortly after she arrived, a good-natured monk called out to her: "Hey, fat lady! You so beautiful!"

She described her role as an English teacher at the temple as a "culture shock" and fascinating life-changing experience.

In Chiang Mai, Wat Doi Saket welcomes foreign teachers but does not actively encourage meditation, though they are welcome to study Buddhism in their free time.

"I have been developing this program since October 2009," said Wat Doi Saket's teaching director David Poppe, 25, who was born in Simsbury, Connecticut.

"The temple has 160 novice monks, and class sizes range from six to 35.  Given the size and schedule of the school, only two volunteers can live here and teach at one time.

"Teachers can expect to work roughly four to six hours per day, with the mornings free."

Wat Doi Saket's English teaching program is part of the ATMA SEVA Foundation. Foreigners pay much less to teach English at Wat Doi Saket, compared with the teaching and meditation program in Ratchaburi.

"At the wat, there is a kitchen below the volunteers' bedrooms, and each day one of the cooks delivers breakfast, lunch, and dinner," Mr. Poppe said.

"So far, none of the volunteers has been Buddhist.  Religion has no bearing in regards to acceptance to the program.  The goal is to improve conversational English, and if volunteers are interested in Buddhism they can pursue infinite knowledge, but nothing is scheduled or pushed."

Mr. Poppe first came to Thailand in 2007 and while not a Buddhist himself, is "very intrigued by Buddhism."

"I can arrange meditation retreats, dharma lectures, and have access to Buddhist resources if the desire to learn is present," he said.

--------
Richard S. Ehrlich is from San Francisco, California. He has reported news for international media from Asia since 1978, based in Hong Kong, New Delhi and now Bangkok.