Lifting the veil of ignorance: Buddhism and justice

Bangkok, Thailand -- The 20-year jail sentence handed down to Mr Amphon (last name withheld), aka Ah Kong (southern Chinese for "grandfather"), for sending four SMS messages deemed offensive to the monarchy, has stirred a debate on the Thai justice system. 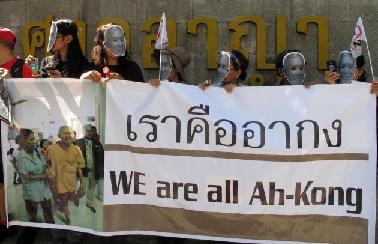 The relevant "lese majeste" law has also became a hot topic, as it has increasingly become a tool for political oppression rather than protection of the monarchy. Among the many views expressed, some Buddhists cite the law of karma to justify the verdict, saying that the grandfather got exactly what he deserved.

It's true that "you reap what you sow" is more or less the Buddha's teaching on karma at the spiritual level. But when the teachings are applied to the social level, there are many other complicating factors at play that many Thais sarcastically say, "Tham dee dai dee mee thee nai. Tham chua dai dee mee thom pai." (Show me those who reap benefits from good deeds. Plenty of people reap benefits from evil deeds.)

In Sivaka sutta, the Buddha clearly rejected the view that "whatever a person experiences, be it pleasure, pain or neither-pain-nor-pleasure, all is caused by previous karma". He gave examples of physical, biological and social factors as additional causes for present experience, concluding that holders of such views "go beyond what they know by themselves and what is accepted as true by the world".

Attributing everything to karma is therefore not the Buddha's teaching on karmas but the doctrine of karmic determinism rejected by the Buddha. As it can justify everything and mean nothing, a statement like "People got flooded because of karma" only gives a sense of complacency and precludes legitimate discussions on social justice. The Buddha, in Kutadanta sutta and Cakkavatti- Sihanada sutta, told stories in which social phenomena were caused by social and economic injustice such as maldistribution of social wealth.

In Tittha sutta, the Buddha also explained that the doctrine of karmic determinism would mean that people do good and bad deeds as a result of past karma. Therefore, nobody would be responsible for their acts, and there would be no desire and effort to do what should be done and avoid what shouldn't be done. Obviously such a fatalistic view doesn't constitute a religion - let alone the Buddha's. For example, believing that someone is murdered because of karma raises the questions whether the murderer, as an instrument of karma, is morally responsible, why he should be punished, or why he shouldn't do it again when he feels like it.

In addition to the heretical karma justification, some defend their indifference to Ah Kong's case as upekkha (equanimity, even-mindedness). But let's call a spade a spade. Equanimity means detached impartiality - not apathy. Also, the Buddha taught us - for example, in Subha sutta - to apply each and every face of Brahamavihara - loving-kindness (metta), compassion (karuna), empathetic joy (mudita) and equanimity - in all four quarters; that is, towards all without discrimination.

If anything, the real test for loving-kindness and compassion is when misfortune falls on those we disagree with or even hate; empathetic joy when they meet with good fortune; and equanimity when hardship falls on us or our loved ones.

Broad altruistic principles aside, the Buddha did not prescribe for us what social justice looks like in concrete terms. It's left to society to work it out. How, then, can we all agree on a just law, a constitution or a government, despite our vastly different life situations?

To answer that question, we can try putting to work the four faces of Brahmavihara in a thought experiment devised by the American philosopher John Rawls for his theory of justice. Rawls famously proposed the "veil of ignorance", behind which one is deprived of all knowledge of one's own personal characteristics and social and historical circumstances. From this "Original Position", each of us is asked to define just conditions for a society, into whose different positions we will be randomly assigned.

Unaware whether we will be a factory worker or a hi-so factory owner, red shirt, yellow shirt, dry-zone resident, wet-zone dweller, handicapped, able-bodied, male, female, transgender, young, old, straight, gay, atheist, Muslim, Christian, Buddhist, and so on - Rawls argued that we would all agree on equal basic liberties for all citizens, such as freedom of speech and religion. He also argued that, in order to overcome the inequalities of natural contingencies, we would select conditions that are most beneficial to the least advantaged people.

In real life, we also had no idea who, where or how we would be born. If we had the chance to design a society before we came to be who we are, how would we make it out to be? The author believes that we would come to a conclusion not very different from Rawls's.

Behind Rawls's veil, we also don't know who our parents or friends will be. The Buddha took a different approach in Anamattagga Samyutta when he said "… this samsara is without discoverable beginning…. It is not easy to find a being who in this long course has not previously been your mother, your father, your brother, your sister, your son, your daughter…." His deep-time analogy emphasising our interconnection with all others in the world finds its echo in evolutionary biology's conclusion that we are all related and descended from common ancestors.

In the final analysis, saying that "My loved ones could be in any of those social positions (Rawls)" and "There are not any one of them who are not my loved ones in samsara (Buddha)" amount to the same thing. By drawing a conceptual veil to temporarily block out our ego and selfishness, Rawls brings out the deep-seated sense of justice in us.

The world of experience is said to be enveloped in seven veils of darkness. Thus, the Buddha is also called loke-vivattacchaddo ("one who draws aside the veils") to generate light all around. If the Buddha's analogy sheds light on our common humanity, the metaphorical darkness under Rawls's veil of ignorance makes that light shine even brighter. The Buddha would surely approve of Rawls' theory of justice.

Now the question everyone, regardless of status in life, must ask is this: If it was actually your grandfather who sent those four SMS messages, would 20 years of imprisonment be a fair sentence?

If, after giving it long hard thought, your conclusion is that Ah Kong's sentence and/or the relevant laws are at odds with the kind of just society we want to live in, it's time to declare, "We are all Ah Kong."