Bangkok, Thailand -- In June, celebrations were held to commemorate 2600 years of illumination of the "Awakened One". In a conference, hundreds of faithful, monks and nuns discuss the value of faith and the challenges of modernity. The risks of globalization, promoting an education system capable of forming good citizens. 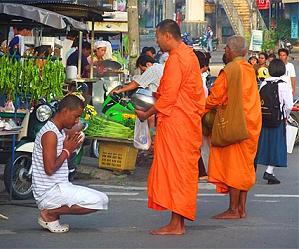 Against the materialism prevalent in society, the obsessive search for money, worldly possessions and the pervasive spiritual crisis, Thai Buddhists state that "the path to enlightenment" indicated by the "awakened" is the only way to create "a world of peace."

Coinciding with the celebrations for Buddha's enlightenment 2600 years, better known as "Buddha Chayatee (BC)," the faithful wanted to promote meetings and events aimed at reinforcing the centrality of faith and religion in the life of the nation. Even Thailand, in fact, in recent years has promoted a politics focused on economics, personal success, while neglecting the spiritual and religious element.

The scandals that have hit some monasteries and leading figures of Buddhism has emphasised local fractures and increased dropouts. For groups and individuals that seek to raise the value of religion, the teachings of Buddha are still essential for peace and harmony locally and internationally.

From June 4 to 30 across Thailand events and commemorations of the 2600 remember the enlightenment of Buddha were held. On the final day, the "Public Stage" movement opened a meeting at Buddhamondhol Buddhist Center in Bangkok, attended by hundreds of people, including monks, nuns and faithful.

At the heart of the encounter, the value of religion past and present, along with ways to encourage and promote Buddhism in Thai society. The role of schools and educational establishments need to be stepped up however, called to promote among students the teachings of the Buddha and their value for contemporary life.

62.8 million people live in Thailand, of which 10 million are concentrated in Bangkok. The vast majority, almost 95% profess Buddhism, while 4% are Muslims (especially in the south) and 1% Christian, of which 300 thousand Catholics. For this reason the country is still considered the world centre of religion, with over 33 thousand monasteries and institutes across the area, even if it is going through a period of deep crisis in vocations and practice of worship.

For famous columnist Somchai Preeechasilp the cause lies in a growing materialism, combined with the severe economic crisis. Globalization, he said, poses challenges to the principles of Buddhism, to the values and morals that people should use concretely strengthen their spirituality.

Prapapatra Niyom, director of the Buddhist Path School (BPS), explains that the institutions are responsible for developing all aspects of the person in the students: physical, mental, emotional and social. It has launched a pre-school for children, with the aim of forming children who are educated and formed and able to best represent the future of the nation. From an early age pupils are called to recite morning prayers, meditate on the teachings of the Buddha for at least five minutes a day and use it as a maximum in the resolution of everyday problems.

As is the case with little Saifon, whose name means "drop of rain", blind since birth, but who has wanted to be "illuminated" by following the example of the "master". A college student named Yarnapatra Yodkaew finally remembers that every good Buddhist faithful must develop three characteristics: discipline in preserving the teachings of the enlightened, the search of solitude for personal meditation and intelligence to understand the way forward when called to address a problem or a challenge.