Tourism sector leaders say the birthplace of Buddhism could attract many Thai pilgrims and tourists, but New Delhi needs to clean up its act first

Bangkok, Thailand -- Thai tour operators view Buddhist tourism in India as a potential boom market if the country's Ministry of Tourism improves tourist facilities in destinations that are of interest to Thai-Buddhist tourists. 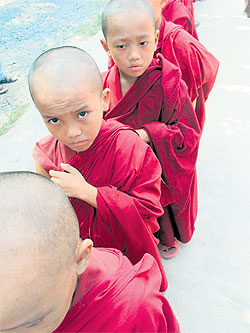 << RITE OF PASSAGE: Novice monks line up for prayers.

At the second International Buddhist Conclave held in Varanasi at the end of last month, Thai tourist operators highlighted problems that needed to be addressed. Among these were the relatively tight immigration laws, shortcomings in public infrastructure and the quality of food and hotels.

The conclave was held to showcase India's Buddhist heritage in order to attract Buddhist pilgrims and tourists around the world.

Sarnath, a deer park northeast of the holy city of Varanasi, is where Lord Buddha delivered his first sermon after attaining enlightenment, more than 2,500 years ago.

Kushinagar, a principal centre of the Buddhist pilgrimage, is where Lord Buddha left his corporeal self and attained Mahaparinirvana.

Supriya Boonyagate, a tour operator with Two by Four Travel Ltd, has promoted Thai-Buddhist pilgrimages to India for more than a decade. She said she has has submitted a three-point proposal to the Ministry of Tourism of India. First, she said the Indian government should abolish its immigration policy, which is too tight and undermines opportunities for Thai tour operators to bring tourists to visit Buddhist destinations in India.

Ms Supriya was referring to an Indian immigration regulation which prevents foreigners from returning to the country within two months of a previous trip.

"This immigration regulation has become a growing headache for all Thai tour operators who can't send their experienced Thai tourist guides to lead new groups of Thai-Buddhist pilgrims and tourists if those guides have made a previous trip to India within the past two months," she said.

For example, Ms Supriya said, the 300km highway linking Varanasi with Kushinagar should be extended and paved with asphalt.

"It takes us about seven to eight hours [to make the trip] which is really incredible," she said. "And many more public toilets need to be built along a Buddhist tourist trail."

Finally, Ms Supriya said she wanted India to improve the quality of food and hotels in Buddhist destinations.

There needs to be a variety of international food on offer, she said, because most Thais will not be able to eat Indian food every day.

Ms Nuanchan, who has operated Thai-Buddhist pilgrimage tours to India for more than three decades, said she wanted Indian authorities to take action to promote the sector, especially in relation to Buddhist attractions in the subcontinent.

She said India needed to improve the condition of its national highways in Buddhist destinations and also needed to install public toilets that adhere to international standards.

She said there are also few trains and limited seats available during the peak tourism season between October to March, so she wanted India to provide more trains with more seats for Thai-Buddhist pilgrims and tourists.

"We believe many more Thai-Buddhist pilgrims and tourists will visit India if the country acts on our proposals," she said.

Mr Sahai, the tourism chief, said the origins of Buddhism are in India and the country is the main attraction for Buddhist tourists from around the world.

Mr Sahai said his ministry is drawing up plans to attract more tourists from Buddhist countries by providing them with special facilities.

He said India has tried to improve its public infrastructure by building roads and airports that can better promote the travel of Buddhist tourists from around the world.

"Buddhism is a world religion now, so its sites hold a great attraction for tourists from the world over. The Ministry of Tourism is continuing with its efforts to identify more Buddhist tourist circuits and develop them in holistic and integrated manner," he said.

To promote Buddhist tourism in India, tourists from countries which have a large Buddhist population, such as Thailand and Malaysia, will soon be provided with the option of getting a visa on arrival, he said.

He said the Ministry of Tourism plans to develop a ghat [set of stairs descending into a river] on the bank of the Ganges River in the holy city of Varanasi in the name of Lord Buddha, and he pledged to keep Varanasi and the river clean.

The International Buddhist Conclave in India is being held after two years. The last conclave was held in 2010.