by PRAVIT ROJANAPHRUK, The Nation, October 2, 2013

Bangkok, Thailand -- IS "KNOWING BUDDHA" - a group of Thai Buddhists who are relentlessly tackling what they see as a disrespectful act against the image of Buddha - the new face of Thai Buddhism? 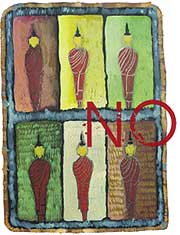 The year-old group has been battling manufacturers of all sorts of products around the world that exploit the image of the Buddha to make money. The goods range from skateboards, lampstands, armchairs and underwear to bars named after the historical Buddha such as the Buddha Bar in Paris and Buddha Tattoo.

While I sympathise with these Buddhists who feel deeply offended, I cannot condone their call to have a law enacted to make disrespectful acts or products against the Buddha a criminal offence. Do they really think the historical Buddha would have approved the jailing of people who express disrespect for him?

It is fine to proactively promote mutual religious respect and for this Knowing Buddha plans to distribute two million pamphlets at various spots for tourists entering the Kingdom. But calling for the jailing of "offenders" is just not Buddhist.

When the group hosted a seminar on the topic last week at the Senate, its chairwoman, Acharawadee Wongsakol, spoke with bitterness and anger. Anger and attachment are rather un-Buddhist, however.

The group needs to be reminded that the historical Buddha never approved the idea of making a statue in his liking for worship. Such a practice began with the Gandhara Buddha statues with classical Greek artistic influence in what is today's northwest Pakistan, after the lifetime of the Buddha.

What makes Buddhism unlike most other religions is that Buddha is not God, and perhaps this is why he was never supportive of the idea of having a statue made in his liking for worship. People can easily cling onto a Buddha statue instead of Buddhist teaching, which was originally more of a philosophy than a religion. And this is what groups like Knowing Buddha are clinging on to now - the image of the Buddha and the perceived disrespect done to it.

As anyone who is familiar with Thailand knows, the trade in assorted Buddhist amulets is a big business here. Actually, it's not just a business, but a gross distortion of Buddhist teachings, as amulet owners believe that by owning, wearing and praying to these small images of the Lord Buddha, they will be blessed and protected and made rich, amorously attractive, popular and allegedly even bulletproof - subject to owning the right kind of genuine amulet.

Some of these popular amulets the size of a Bt10 coin and made of clay or metal could fetch Bt1 million or more and there are magazines entirely devoted to discerning the real item from the phoneys, and the facilitation of the trade.

It's ironic that a group calling itself Knowing Buddha is more concerned about what non-Buddhists in the West do to pseudo-Buddha images than what is happening to Thai Buddhists who have prioritised owning the right amulet over truly understanding and knowing Buddha and his teachings.