Chiangmai, Thailand -- American-born Santikaro, prodigy of the 20th century’s most influential ascetic-philosopher monk Buddhadasa, was invited by The Cabin Chiang Mai – Asia’s top inpatient rehab, to talk about how Buddhist principles can be incorporated into the 12 Step treatment model. 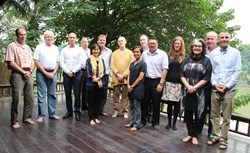 The former monk conducted two sessions – one for the centre’s counselling team and one for its clients. The 12 Steps, founded on Christian principles, is the most widely used addiction recovery model in the world.

Santikaro, who retired from monkhood in 2004 but still continues to practice and teach the work of the late monk The Venerable Buddhadasa at his Buddhism centre in Wisconsin, Liberation Park, first became interested in the 12 Step program upon his return to the US in 2000 through friends who were recovering addicts.

“Through regular conversations we discussed meditation in regard to Step 11 and questions like ‘What is higher power in Buddhism?’ and ‘How can the noble eightfold path relate to the 12 Steps?’” he explained. In 2004 Santikaro shared Buddhist reflections on the 12 steps in a series of meetings and received impressive feedback on the value and practicality of his offerings. They are based on the core Buddhist teachings which advocate a way of life based on practicing mindfulness and meditation that can lead to the elimination of the ego and therefore suffering.

“Of all the things we use and abuse to numb, escape, and buffer our fears, hurts, shame, and other sufferings, self is the most basic and central. Born from ignorance and craving, producing identity and further becoming, clinging to me and mine holds the tangles of suffering together. Ironically, the self we grasp at is conceptual and illusory. From this perspective, recovery, ultimately, is the same as liberation,” Santikaro concluded.

The Cabin Chiang Mai’s treatment model incorporates a secularised version of the 12 Steps that is culturally friendly along with a combination of psychological techniques such as CBT and 3 Circles, enhanced by exercise and Mindfulness therapy. This unique treatment approach draws clients from around the globe with a 96% programme completion rate.

The Cabin Chiang Mai is Asia’s leading drug and alcohol treatment centre, with two facilities and a secondary treatment Sober House located in Chiang Mai. Since 2009 the Cabin has treated over 600 men and women from around the world with a programme completion rate of 96% and a recovery rate amongst the highest in the world.