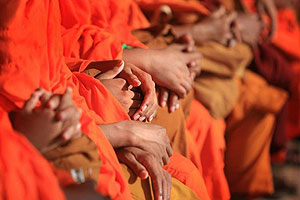 The abuse was discovered after police rescued one boy from the abuse ring last year, police said, adding all the children involved were under 15 years of age.

"Four of the abbots volunteered to disrobe, but one denied the charges and was forcibly defrocked," Major General Prachuab Wongsuk, of the northern police region, said on Wednesday.

He said police found alcohol and pornography during a search of living quarters at five monasteries.

Police believe the abbots were acting together and Prachuab predicted that more monks would be arrested soon.

Those charged face a maximum of 20 years in jail if convicted.

Monks in Thailand, where some 95 percent of the population are practising Buddhists, have been hit by a series of scandals, with local media reporting cases of drug-taking, drinking, gambling and visiting prostitutes.

In September, authorities seized nearly $800,000 worth of assets, including a Porsche and a Mercedes-Benz, from a monk who was defrocked for a controversial trip in a private jet and who was also accused of fathering a child by an under-aged girl a decade earlier.