NAKHON PATHOM, Thailand -- Phra Buddha Issara is a monk with a mission. From his Buddhist temple near Bangkok he is calling for a radical overhaul of Thai Buddhism, fearing millions of dollars in temple donations and a rapidly modernizing nation are corrupting monks. 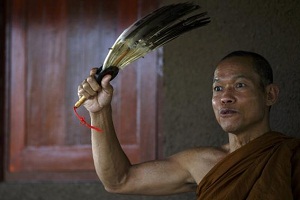 << Phra Buddha Issara reacts during an interview with Reuters at Wat Or Noi in Nakhon Pathom February 27, 2015.
Credit: Reuters/Athit Perawongmetha

Surrounded by verdant green rice fields at Wat Or Noi temple, Issara said he wants better oversight of temple finances and to shake up the fossilized structure of Thai Buddhism.

"Buddhism in Thailand is a poisoned fruit. The highest level of the Buddhist religion has turned out to be the devious one," he told Reuters in an interview.

The Dhammakaya temple members include some of Thailand's most powerful politicians and is regarded as the country's richest Buddhist temple.

Abbot Phra Dhammachayo rejected the fraud charges and the council said that as he returned most of the money there was no misconduct. The NRC, which has not released details of the alleged fraud, is pushing for a probe into why the council cleared Dhammachayo and the ties between it and the temple.

The fraud allegation is just the latest in a series of scandals that have rocked Thailand's Buddhist clergy. Other examples include a monk caught with 120,000 methamphetamine pills and another who was dismissed from his temple for investing $1.2 million on the stock market.

"The money and power swirling around some Thai temples and monks makes them immune to criticism," said Sulak Sivaraksa, one of Thailand's pre-eminent Buddhist scholars.

"This is why we need to reform the Sangha and start afresh," Sivaraksa told Reuters.

The Supreme Council, a coterie of 20 elderly monks, has traditionally evaded public scrutiny due to its opaque workings and the reverence of millions of Buddhists.

And for years, reports of misbehaving monks were often dismissed as standalone cases rather than a product of an ossified institution beyond the reach of the law.

But the latest fraud allegation has unleashed an avalanche of public criticism.

Many Thai Buddhists feel those elders are incapable of supervising the behavior of 300,000 monks in a rapidly modernizing nation where worldly temptations are everywhere and temples are flush with cash.

"The SSC governs but there is nobody that governs them," said Issara, who is calling for a boycott of the Sangha.

Issara, who played a prominent role in protests last year that helped to overthrow the government of former Prime Minister Yingluck Shinawatra, said Thais should no longer listen to decrees handed down by the council.

He wants the government to check the accounts of all temples and seize assets from those suspected of mishandling donations. He is also calling for the state to restructure the Sangha.

The National Office of Buddhism, which is in charge of promoting Buddhism in Thailand, said civilians should not interfere in the religious world.

"There are Buddhist governors to check whether they [temples and monks] have violated conduct," Somchai Surachatri, the National Office of Buddhism's spokesman, told Reuters.

Recently Buddhist monk Luang Pu Nenkham was stripped of his religious title. Nenkham gained notoriety in 2013 when a YouTube video showing him carrying a Louis Vuitton bag aboard a private jet went viral.

He is now on the run after millions of dollars in assets were uncovered in his name and Thai authorities issued an arrest warrant for him for having sex with a minor.