Nakhon Pathom, Thailand -- It begins with moans, then screams and feverish dancing followed by mad dashes through a densely packed crowd. 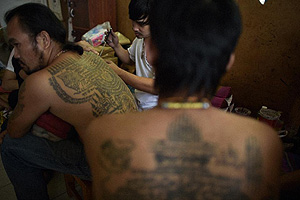 Each March followers return to the temple in Nakhon Pathom province, 80 kilometres (50 miles) west of Bangkok, to have the protective power of their tattoos "recharged" by monks.

Sak Yant artwork often feature animals and as the festival reaches its climax, many acolytes work themselves into a wild trance that ends with them sprinting though crowds possessed by an animalistic power.

Only a phalanx of volunteers at the end of the thronging courtyard stops the devotees from hurtling into a the plinth of a large Buddha inside the complex.

Time after time primarily male devotees smash into the volunteers who then pinch the ears of those in a deep trance to "release" the animal's spirit.

"I came here to renew the protection of my tattoos and also to compliment the one I have on my back," Noom, a 32-year-old from Bangkok told AFP, beads of sweat still visible on his forehead after receiving a new tattoo.

The monks use a long metal needle dipped in ink and thousands of quick, painful stabs to create the tattoos which are given to devotees who make an offering to the temple.

Thailand is a deeply superstitious place where animism and folk beliefs are deeply infused with Buddhism. And it is not just tattoos that people believe offer them protection.

Exorcisms, protective spells and trinkets are all readily available at a price, while books and films about haunting spirits are hugely popular.

Even businesses pay monks to make annual visits to chase away evil spirits.