Monks often targeted by insurgents who see them as symbols of Thai state, reminder of past attempts to forcefully convert Malay Muslims

Bangkok, Thailand -- Thailand’s military has officially asked local administrations in the insurgency-plagued Muslim south to implement a series of special safety measures for Buddhist monks, a day after a fatal attack during an alms gathering round. 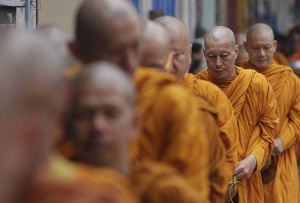 Among the measures announced Sunday, provincial governors and districts chiefs must organize “special safety zones” where “the Buddhist monks will be able to collect alms and the Buddhist laypeople will be able to offer donations to the monks,” according to an official document obtained by Anadolu Agency.

The zones will be cleared and controlled daily by military forces, police squads and volunteer militias before monks start walking to collect donations in accordance with Thai Buddhist custom, the Fourth Army -- in charge of southern Thailand – told local administrations in the document.

Another clause stipulated that “in areas where there is only a small number of temples or if the safety zones cannot be securely established, the lay-Buddhists will have to offer donations to the monks within the temples’ compounds.”

The document, signed by the Fourth Army’s chief General Prakarn Cholayuth, also called on local Buddhist associations to cooperate among themselves and with the authorities of ensure the safety of Buddhist monks and temples.

The calls came in the wake of a bombing that killed a soldier and a Buddhist monk Saturday morning when the clerics were gathering alms under police escort in Saiburi district of conflict-torn Pattani province. Another monk, two soldiers and three civilians sustained injuries in the incident.

Buddhist monks are often targeted by separatist insurgents who considered them as both symbols of the Thai state and a reminder of past attempts to convert Malay Muslims by force.

According to police statistics, 19 monks have been killed and 25 injured in insurgency-related violence since 2004.

Saturday’s attack came in the wake of a series of shootings and bombings over the last three weeks -- a rise in violence that occurs every year during the Islamic holy month of Ramadan, which ended on July 17 in Thailand.

On Monday, two insurgents were killed in a clash with soldiers while a third suspect was captured.

The incidents seemed to confirm observations published by a think tank earlier this month that said the generals ruling Thailand since last year’s coup -- despite expressing interest in restarting a peace dialogue -- seemed to prioritize a military approach to solving the conflict.

The southern insurgency is rooted in a century-old ethno-cultural conflict between the Malay Muslims living in the provinces of Pattani, Yala and Narathiwat and some districts of Songhkla, and the Thai central state where Buddhism is de facto considered the national religion.

Armed insurgent groups were formed in the 1960s after the then-military dictatorship tried to interfere in Islamic schools. The Patani United Liberation Organization (PULO) had been the dominant rebel group until it faded away in the middle of the 1990s.

In 2004, a rejuvenated armed movement -- composed of numerous local cells of fighters loosely grouped around the Barisan Revolusi Nasional (BRN) or National Revolutionary Front -- re-emerged. Since then, the conflict has killed 6,400 people and injured over 11,000, making it one of the deadliest low-intensity conflict on the planet.

A peace dialogue had begun under the elected government of former Prime Minister Yingluck Shinawatra in 2013, but was suspended in December that year due to political tensions in Bangkok.

The May 22, 2014 coup against Yingluck’s government that brought the junta to power added more uncertainty to a possible peaceful solution to the conflict, despite the military expressing commitment to pursue talks.

Six rebel groups, including PULO and BRN, have recently set up a Consultative Council of Patani, under the name MARA Patani, in order to coordinate for eventual peace talks. But as noted by the International Crisis Group report, “BRN hardliners remain uncommitted.”