From Thailand, in search of Buddhist link

Chennai, India -- Even though Buddhism thrived in Poompuhar and Nagapattinam in Tamil Nadu, they do not figure in the list places to be visited by the pilgrims from South-East Asian countries. They tour North India and visit Buddhist pilgrim centres like Bodh Gaya. 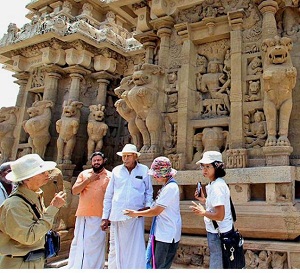 A few days ago, a group of scholars and Buddhist monks from Thailand visited Nagapattinam, Thanjavur, Kancheepuram, Srirangam, Madurai and other famous temples on the advice of noted Indologist and former director of Archaeology department V. Nagasamy.

“They have woken up to the Buddhist connection in this part of the country. Around 150 years ago, 300 bronze and gold-plated Buddha statues were found in Nagapattinam during an excavation and 200 of them are in Egmore museum, while the others were sent to countries including Thailand,” said Dr Nagasamy.

He pointed out that the Choodamani Vihara in Nagapattinam was built by King Raja Raja on the request of the King of Thailand Srimara Vijayathunga Varman in memory of his father Choodamani Varman in the 11th century. Raja Raja’s son Rajedra Chola established Buddhist pallis. In Poompohar, a Buddha vihara was found during archaeological excavation.

“It is not just Buddhism. Thailand has a long history of worshiping Hindu deities such as Brahma, Vishnu and Siva, though the temples today remain only as monuments,” said Chitrapat Prapandvidya, Assistant Professor and Advisor of the Sanskrit Studies Centre at Silapakorn University.

But Mr Chitrapat Prapandvidya and others were not allowed to enter the inner precincts of Srirangam and Madurai temples on the ground that they were non-Hindus.

“We are not able to understand why we were denied entry,” said Mr. Chirapat Prapandvidya, who is teaching Sanskrit to the Princess of Thailand. But their Sanskrit is more of colloquial in style.

Dr. Nagasamy said most of the Buddhist temples had the statue of Vishnu sitting on Garuda and a 7{+t}{+h}century inscription found in Mamallapuram described Buddha as the 9{+t}{+h}avatara of Vishnu.

“When MGR was the Chief Minister, I suggested construction of a Buddhist Stupa in Poompuhar. But it did not materialise. Now, I have asked the tourists from Thailand to pursue the idea as it will further the relationship between the country and Tamil Nadu,” Mr Nagasamy said.