Bangkok, Thailand -- For a Buddhist monk killed in the deep South, a mosque should be burned down in retaliation. This violent proposal from a Buddhist monk stirred a heated debate on social media last week. Is it merely a storm in a tea cup? The answer is no. 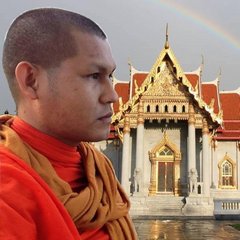 << Phra Apichart Punnajanto, an instructor at Wat Benchamabophit in Bangkok, started the controversy when he demanded a mosque be razed every time a Buddhist monk is killed

Rather, his call for violence is just the tip of the iceberg. If not nipped in the bud, Thailand may soon follow the bloody paths of religious violence in Myanmar and Sri Lanka.

The monk at the centre of the controversy is Phra Apichart Punnajanto, head of monk preachers at the prestigious Wat Benchamabopit (the Marble Temple).

We learned about his fierce hatred for Muslims last week through his Facebook post, but he must have long shared his violent views with other monk preachers.

When I read his Facebook post, I felt the same way many did. Appalled. Everything he said is against Buddhism. But to my dismay, his violence was welcomed by many like minds.

How should we respond to this monk's unmonkly violent extremism? Many believe we should not give him the attention he seeks. It is also just one monk's view.

Furthermore, more discussions will most likely trigger resentment and anger from Muslims, many of whom - like this monk - operate with ethnic and racial chauvinism, not their prophet's peaceful teachings. So why let ourselves be this monk's tool to intensify religious division? Just ignore him and let his ugly proposal die a natural death in social media.

Phra Apichart's mosque-burning idea may be just his personal one. But fear and prejudice against Islam and Muslims in the Buddhist clergy are certainly not.

The clergy is now campaigning to make Buddhism the national religion in the new constitution.

The attempt is not new. It comes up every time the country is writing a new constitution, which is quite often. And every time, the reason is to give Thai Buddhism better protection from external threats, read other religions.

When I was covering the clergy's previous national religion attempts, pamphlets about threats from Islam and Christianity were distributed openly. This could not be possible without support from higher-ups.

There was once an attempt to create an inter-faith commission to set policies on religious matters. Again, the clergy attacked it as a ploy which would allow other faiths to have a say on policies governing Thai Buddhism. The plan was eventually aborted.

During the past decade, fear of Islam has been fanned up by the southern insurgency. While Buddhism encourages attempts to transcend all layers of prejudice - religious, racial, ideological, or gender-based -  to generate compassion from an understanding that all is one and the same, most Thai Buddhist monks are locked into ultra-nationalism.

For them, southern Muslims are outsiders because they are not ethnic Thais. As outsiders, they should not ask too much from the host country. And should they turn to violence to get what they want, they should get violence in return.

"It's time to arm Thai Buddhists," urged Phra Apichart. "Time for compassion has run out. If a monk is killed in the deep South, a mosque must be burned down in exchange.

"Starting from the North, we must chase away this cult from every area until there is no one in that cult left. We will oppose its attempt to enter our area through all means," he said in his post.

This thinking, which echoes other right-wing monks, makes me think they should leave the monkhood right away.

But if we find the ultra-nationalistic views from the likes of Phra Apichart appalling, what should concern us more is the total silence from the elders to his call to arms. Such silence can only be interpreted as tacit support.

In August this year, the Sangha Council issued an order prohibiting monks from posting on social media anything that is damaging to Buddhism. The elders are obviously unhappy about the widely shared pictures of monks drinking or engaging in sexual or other unmonkly acts and want to protect the clergy's image.

Those monks who wrongly use social media will be punished, threatened the elders.

Phra Apichart's Facebook post is hate speech pure and simple. It incites hate, violence, leading to killings. It betrays Buddhist teachings on every count. Yet the cleric elders did not say a word.

The threat to Thai Buddhism is not external. The monks are their own enemies. When they are taken over by racist nationalism and become cheerleaders for violence, they cannot expect to retain public trust and respect.