Hua Hin, Thailand -- A team of ice sculptors in Prachuap Khiri Khan plan to carve what they say will be the world’s tallest Buddha ice statue to mark His Majesty the King’s 88th birthday on Dec 5. 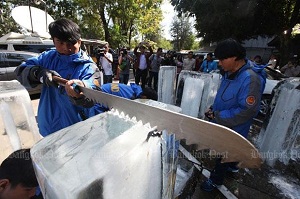 << A Buddha statue to be used a model for the ice artists on Dec 5. (Photo by Chaiwat Satyaem)

The ice carving will have a planned height of 599cm and will be sculpted on open ground in front of Hua Hin railway station, adding more colour to this year&rsquo;s activities to celebrate His Majesty&rsquo;s birthday.

Award winning ice sculptor Alongkorn Timcharoen, of Hua Hin, said on Tuesday that he and six fellow ice artists would transform 99 blocks of ice into the Buddha statue.

Since he posted his plan on his Facebook page, many people had shown an interest in supporting the activity, said Mr Alongkorn.

The Anantarak Health Training School in Hua Hin had offered to donate 99 blocks of ice for use in making the Buddha statue.

He said he and his colleagues planned to work from noon to 7pm on Dec 5.  That night they would take part in the candlelight ceremony to celebrate the King&rsquo;s birthday in front of Hua Hin railway station, and other activities to be held there.

Mr Alongkorn has competed in several ice sculpture contests in Thailand and abroad, including an  ice sculpting competition in Harbin, China.

He won an honourable mention at the 2013 World Congress of Ice Sculpture competition in Asahikawa, Japan, and won the first prize at ice sculpture contests in Thailand two years running.