Bangkok, Thailand -- Hundreds of thousands of people bid a final farewell to the late Supreme Patriarch Wednesday at a royally sponsored cremation ceremony. 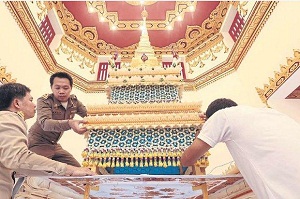 << His Royal Highness Crown Prince Maha Vajiralongkorn presides over a royal merit-making ceremony marking the start of the funeral for the late Supreme Patriarch. (Photo by Weerawong Wongpreedee).

Sangha leaders and representatives of Buddhist communities from 13 countries arrived in Thailand to attend the cremation rites.

His Holiness's body was moved on a royal chariot in a procession from Wat Bowon Niwet Vihara to Wat Debsirindrawas where his cremation was held.

His Royal Highness Crown Prince Maha Vajiralongkorn presided over the cremation ceremony on Wednesday on behalf of His Majesty the King.

The procession passed along Phra Sumen Road, Lan Luang Road, Krung Kasem Road and Thanon Luang Road. The 3.38km route and 20 other roads connected to it was closed to traffic from 6am to noon and from 2pm to 10pm.

The Bangkok Metropolitan Administration has prepared some 200,000 <span class="Italic">dok mai chan</span>, or paper flowers used in cremation rites, for people to place at pavilions set up at Wat Bowon Niwet Vihara and Wat Debsirindrawas.

Other temples in Bangkok's 46 districts have also prepared 10,000 dok mai chan each.

Former Prime Minister's Office permanent secretary-general Tongthong Chandransu, who sits on a government committee set up to oversee the cremation ceremony, said civil servants and the public have been requested to dress in black attire.

It was the first time the government has invited Sangha leaders from overseas to attend a Supreme Patriarch's funeral.

At 4.30pm Tuesday, His Royal Highness Crown Prince Maha Vajiralongkorn performed a royal merit-making ceremony marking the start of the funeral at Wat Bowon Niwet Vihara where the Supreme Patriarch's body is lying in state.

The Crown Prince was accompanied by Her Royal Highness Princess Maha Chakri Sirindhorn.

On Thursday, the Crown Prince will preside over the ceremony to collect the Supreme Patriarch's remains, which will be returned to Wat Bowon Niwet Vihara for merit-making ceremonies.

A relic ceremony will be held on Saturday followed by another in which the casket containing the ashes will be transferred to Phra Wiharn Keng inside Wat Bowon Niwet Vihara where they will be kept permanently.

Phra Sakayawongwisut, assistant abbot of Wat Bowon Niwet Vihara, said the public will be allowed to pay their respects to His Holiness's relics at the temple following the ceremonies. 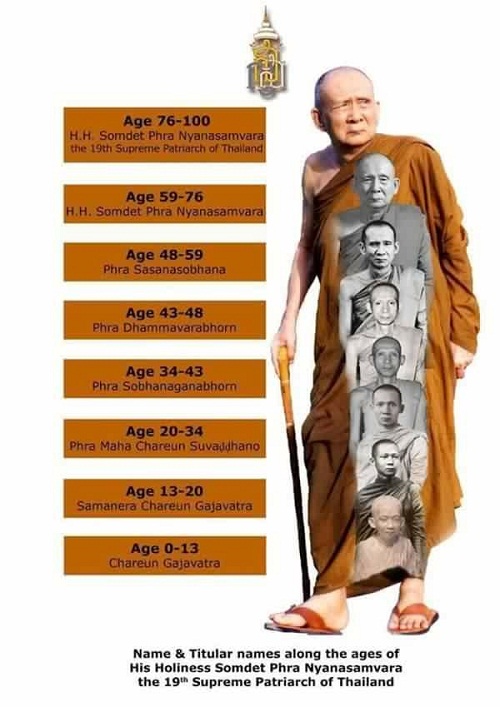 His Holiness was appointed by His Majesty the King as the head of the Buddhist clergy in 1989.

His Holiness was born on Oct 3, 1913, in Kanchanaburi province. His birth name was Charoen Gajavatra.

At 14, he was ordained as a novice at Wat Devasangaram in Kanchanaburi before pursuing further Buddhist studies and the Pali language at Wat Bowon Niwet Vihara in Bangkok.

At 43, the monk  was assigned by the Supreme Patriarch at the time to take care of and give advice to His Majesty the King who was ordained as a monk in 1956.