Bangkok, Thailand -- Paiboon Nititawan, ex-chairman of the defunct National Reform Council committee on religious affairs, is pursuing legal action against the Sangha Supreme Council (SSC) and the National Office of Buddhism (NOB) after the two Buddhist bodies refused to defrock a controversial monk. 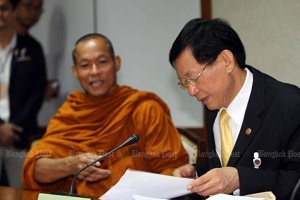 Mr Paiboon accused the SSC and the NOB Thursday of aiding and abetting alleged wrongdoings by Wat Phra Dhammakaya's abbot Phra Dhammachayo, who was accused of violating the Buddhist monks' code of conduct.

He said he will next week petition the Department of Special Investigation (DSI) and the Office of the Ombudsman to probe the SSC and the NOB for alleged dereliction of duty. The NOB serves as secretary to the SSC.

The case against Phra Dhammachayo was based on a letter, dated April 26, 1999, written by the late Supreme Patriarch, which recommended the monk be defrocked for violating the monks' code of conduct by putting assets -- including 1,500 rai of land that belonged to the temple -- in his name. The letter was sent to the SSC.

However, the SSC did not defrock the monk. Instead, the council only ordered those concerned to force the monk to transfer the land to the temple. The DSI earlier this month asked the NOB whether it had made any progress in taking action against the abbot as suggested by the late Supreme Patriarch. The SSC held a meeting on Wednesday to discuss the DSI's inquiry.

Speaking after Wednesday's meeting, NOB deputy director Chayapol Pongsida said the SSC concluded there would be no further grounds for the SSC to rule against Phra Dhammachayo.

The panel said the petition was incomplete, and lacked details, though the panel did not elaborate.

The petition was filed by Sompon Thepsitha, former president of the Young Buddhist Association of Thailand and Manop Pol-Pailin, ex-specialist of the Religious Affairs Department.

Mr Chayapol also said the actions of the monastic probe panel, comprising the Pathum Thani provincial chief monk, the deputy chief of Sangha Region 1 and the chief of the Sangha Region 1, were similar to the court of first instance. Since the panel dismissed the case, the SSC -- which he likened to the Supreme Court -- has no authority to take it up for further consideration, Mr Chayapol said.
Mr Paiboon yesterday said the SSC has two legal regulations -- 11 and 21 -- to punish monks found guilty of breaching the monks' code of conduct.

Regulation No.11 stipulates proceedings similar to the three-tier court system, though Mr Paiboon said this regulation is flawed and has led to "rogue monks" being let off the hook in the past.

Mr Paiboon asked why the SSC avoided using Regulation No.21, which gives it direct power to punish rogue monks.