In Phuket, Thailand, a Buddhist temple can be more relaxing than the beach

Phuket, Thailand -- A funny thing happened on my way to a beach in Phuket (poo-KET). I came upon the annual Vegetarian Festival, a nine-day Chinese celebration thought to bestow good fortune. 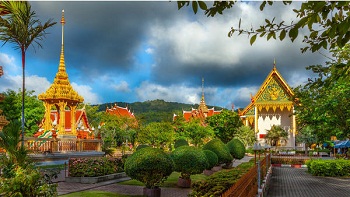 I like kale and sprouts as well as the next person, but Phuket's October festival is over the top. Devotees, most dressed in white, pierce their cheeks and mouths with daggers, skewers, swords, even guns and tree branches. Then they hold noisy processions through the city, set off fireworks, bang drums and beat themselves with spiky metal balls.

The processions and drums, OK, but the mutilations seem a little out there. Especially since people bleed a lot on the white robes.

The annual fall celebration is said to be a tourist attraction, but I walked into it cold. And open-mouthed. Well, maybe that's the wrong phrase. To prepare yourself, you can read more about the Phuket vegetarian festival.

Phuket's vegetarian celebration depressed me so much that I went straight to Wat Chalong Buddhist temple for a spiritual lift. The pink three-story temple, the largest in Phuket, has 36 golden Buddhas in various stages of repose: sitting, reclining and meditating. Beautiful and definitely transcendental.

Phuket's beach wasn't as grand an experience. Too crowded for me. It's classified as the most popular beach in Thailand, which means lots of people and lots of vendors selling coconuts, flutes and hats. The streets nearby are well-developed too with plenty of bars, T-shirt shops and hotels.

I might not like the vibe in Phuket, but seeing all that development is a sign of hope: It means many of the physical scars from the powerful tsunami that struck in December 2004 have disappeared. No one who survived the disaster — and nearly a quarter of a million people from 14 countries died as a result of the Indian Ocean quake and tsunami — will forget, but resorts have been rebuilt and the tourist economy reestablished.

Hope comes in many forms.