The sad state of Thai Buddhism

Even abbots must obey the secular law of the land, and certainly the faithful must report wrongdoing

Bangkok, Thailand -- It would be going too far to say that predominantly Buddhist Thailand is suffering a crisis of faith, but the litany of "sins" being committed against the spirit of the Lord Buddha's teachings continues to grow, with several alarming instances recently making headlines and involving legal prosecution. 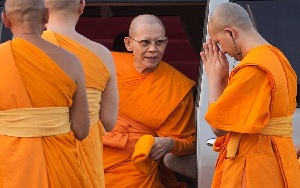 << Phra Dhammachayo, founder of Dhammakaya, has an warrant of arrest issued by Department of Special Investigations, Thailand's equivalent of the FBI.

We have seen cases involving senior monks whose alleged offences were committed within their temples. More and more, it seems, greed, lust and other sins are defiling such sanctified places of worship. Those committing the sins are the very people who are supposed to be providing guidance to lay people in avoiding them.

A warrant for the arrest of the abbot of one temple is currently outstanding in connection with possible involvement in the illegal wildlife trade. Another abbot is wanted for allegedly colluding in laundering money and receiving stolen items, and his robed disciples are shielding him.

Often, when rank-and-file monks pursue illegal activities at their temples, it is done with the knowledge of their abbots, who are thus abrogating their duty to prevent subordinates from sinning against the faith and the laws of the land. Police searches of upcountry temples have uncovered pornography and illicit drugs, particularly amphetamine, in the monks' residences, sometimes along with evidence that the abbots were also involved.

There have been cases of monks being accused of raping or otherwise molesting members of the opposite sex, including minors. Criminals have been known to seek ordination so they can hide out in monasteries. Far more commonly, monks shun the austere life prescribed for them by the Buddha. Far be it for anyone in the modern world to deny them television or mobile phones, but clearly the yearning for material possessions has become ingrained in the order. It threatens to infect the monkhood with the very failure of spirit from which it is intended to protect the lay faithful.

The authorities tend to act against monks only when complaints are received, usually from people living near the temples, those most aware of the wrongdoings occurring within. There is an understandable reluctance on the part of lay Buddhists to report robed offenders to the authorities, but any monk who breaks the law or violates his vows deserves to be castigated, denied alms and other donations, and ultimately disrobed.

Thai Buddhists can offer thanks that the vast majority of monks and temples are clean of sin and illegality. In such instances the abbots and other senior monks are doing their duty conscientiously. Without their tacit approval, such unacceptable activities are unlikely to take place.

In too many cases, the controversies that arise at temples can be directly blamed on abbots who are well aware of what's happening but fail to intervene - or, much more disturbingly, on abbots who are themselves involved in the wrongdoing.

Wayward monks have fallen victim to greed and self-delusion. They have failed to obey the monastic rules, which include adhering to the same laws governing the general populace. And they have shunned the admonition of the Buddha to set aside ego and worldly desires.

To such people, the full measure of state law must be applied. It should be more difficult to become a monk and easier to disrobe one if he causes undue disturbance. Buddhists look to their temples for guidance and solace, not scandal and controversy.
TOP