Bangkok, Thailand -- His Majesty the King presided over an annual ceremony on Monday to promote senior Buddhist monks in the cleric ranking system. 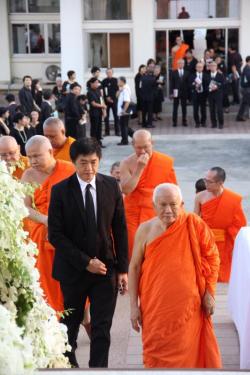 Among the 159 promoted monks, Venerable Bhikkhu P A Payutto received the title Somdej Phraracha Khana, the second-highest position after Supreme Patriarch in the ecclesiastical nine-tiered hierarchy.

He also said humbly that much of the work to promote Buddhism at the temple came from his Buddhist followers as he has not done much in recent years due to his poor health. He told people to treat him the same way they always had.

Widely called Phra Prayudh Payutto, his appointment was unexpected. "Phra Maha Prayudh Payutto was an outsider from the administration of the monks' governing body, even though he is widely respected and revered for his discipline and intelligence," said Phra Palad Wisarut Thirasaddho, a monk from Wat Thumkaocha-ang Temple in Kanchanaburi who formed a network of progressive monks on Facebook.

Yet his promotion was welcomed by Buddhists who believe his presence will help boost the credibility of the Sangha Supreme Council, which has been criticised for failing to tackle a series of monastic issues.

Phra Palad Wisarut said: "His promotion may help restore the image of the Sangha Council, which has been criticised for being inefficient in tackling the Phra Dhammajayo scandal."

With the title of Somdej Phraracha Khana, Phra Prayudh Payutto will automatically be a member of 21-member Sangha Supreme Council, the Buddhist governing body.

Phra Payutto, a prolific and authoritative writer and eloquent preacher, has written articles criticising the Dhammakaya teaching for deviating from real Buddhist principles. However, his supporters said the 77-year-old is unlikely to reform the Sangha administration.
"Phra Prayudh Payutto's health is not good and he does not bother with the title. I think he would rather continue writings and preaching," said Phra Palad Wisarut.

Phra Prayudh Payutto fills the position left vacant by the passing of the late abbot of Wat Suthat, who was also a Somdej. One Somdej position is available for promotion this year.

Under the ecclesiastical organisation, there are eight Somdej, excluding the Supreme Patriarch who is traditionally selected from these eight Somdej monks based on seniority or the duration that the monks have assumed the position of Somdej.

Mano Laohavanich, a former monk and Buddhist lecturer, said: "Phra Prayudh Payutto is unlikely to be a front-runner for the currently vacant Supreme Patriarch position because he just assumed the Somdej title."

At present, Somdej Phra Maha Ratchamangalacharn of Wat Paknam, also known as Somdej Chuang, has the longest seniority in terms of the Somdej title. However, he was said to have ties with Phra Dhammajayo and to be involved in the possession of luxury cars.

Under the new Somdej title, Phra Prayudh Payutto will be named Buddhaghosa after the respected 5th-century Indian Buddhist monk whose best-known work is Visuddhimagga "Path of Purification".
"Phra Payutto deserves the name of Buddhaghosa because he is a prominent scholar," said Sulak Sivaraksa, social commentator and Buddhist scholar, who publicly campaigned and supported the promotion of Phra Prayudh Payutto.

Mr Sulak said that his promotion would mark an auspicious moment and boost the morale of Buddhists. "He is highly disciplined. He lives with austerity and is not attached to materials. He is an eminent monk scholar."

Born in 1939 as Prayudh Aryankura, Phra Payutto has written many articles. His seminal single-volume treatise on Theravada Buddhism entitled Buddhadhamma is considered a crown gem of Buddhist teaching. Among accolades he received is the Unesco Prize for Peace Education in 1994.

Mr Mano said Phra Prayudh Payutto's rise was unconventional because he was the first abbot from a non-royal and upcountry temple to become a Somdej since the introduction of the Sangha Act, which has centralised monk administration since 1902.
Phra Prayudh Payutto is currently the abbot of Wat Nyanavesakavan in the province of Nakhon Pathom. He was also the abbot of Wat Phra Phiren in Bangkok from 1972 to 1976.

According to Mr Mano, King Rama V restructured monk administration in 1902 based on the structure of the Church of England to promote the unity of the Sangha and the state when Siam faced colonisation threats from England and France.
The Sangha Law was later amended in 1941 to incorporate the principle of democracy, creating three branches to decentralise the administration consisting of the ecclesiastical assembly, ecclesiastical cabinet and ecclesiastical court.

However, Field Marshal Sarit Thanarat amended the Sangha Law in 1962 to centralise the cleric administration. The monastic structure became hierarchical with a cleric ranking consisting of nine levels. Since then, the monastic governing body was seen as centralised and at times lacking transparency in its decision-making processes.

The appointment of Phra Prayudh Payutto thus represents fresh air in the rigidly structured monk governing body, said Mr Mano. "It is a positive sign. The Sangha administration faces a crisis of trust for failing to address many cleric issues," said Mr Mano.

Phra Palad Wisarut, however, said: "Phra Prayudh Payutto might not be able to do much to change the system because the Sangha Council's decision is based on the agreement of all members."
Mr Sulak also did not think his promotion would lead to the reform of the Sangha administration.

Asked what should be done to reform the Sangha administration, Mr Sulak said: "Just change the cleric law and go back to the Sangha Law in 1941 to make monastic governance more democratic."
TOP