BANGKOK, Thailand -- Thailand will soon welcome a new Supreme Patriarch. Somdet Phra Maha Muniwong, 89, was appointed last week by King Maha Vajiralongkorn and will be officially installed in a ceremony in Bangkok on Sunday (Feb 12). 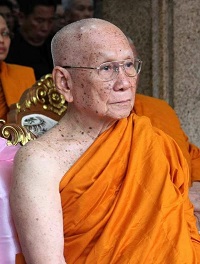 Somdet Phra Maha Muniwong has been an abbot of Ratchabophit temple in Bangkok and like his predecessor Somdet Phra Nyanasamvara, who died in 2013, he is a monk from the Dhammayuttika Nikaya - the smaller and more conservative of Thailand's two Theravada Buddhist orders.

The Dhammayuttika Nikaya order was created in the 19th century by King Mongkut (Rama IV), the great-great-grandfather of the current king.

"Rama IV created the Dhammayuttika Nikaya to reform the monks because the old order was seen as lacking in discipline," explained academic Somrit Luechai. "King Rama IV's goal was to make Buddhism more pure through this more conservative order.

"The Dhammayutika Nikaya could be seen as a tool that past monarchs in the ruling Chakri use in nation-building in the modern era.

"King Rama V created the Supreme Sangha Council and put the Dhammayuttika monks in charge, while Rama VI adopted the Buddhist calendar and put Buddhism as one of the three pillars of modern Thai national identity," Somrit added.

Both late King Bhumibol Adulyadej and the present King Maha Vajiralongkorn were ordained as Dhammayutika monks.

The appointment of the new Supreme Patriarch Somdet Maha Muniwong was made possible by changes the military government made to the country’s monastic law last December.

He replaces Somdet Phra Maha Ratchamangalacharn or Somdet Chuang, the leader that the Supreme Sangha Council picked in January last year for the position.

He is a member of the larger and older of Thai Theravada Buddhism – the Maha Nikaya. But the military government blocked his nomination, accusing him of tax evasion, an accusation that he has denied.

This sparked a rare uprising by monks from his sect last year. Observers said it was a result of simmering resentment over perceived injustice.

“The number of Dhammayuttika monks are about 6 per cent of Maha Nikaya, but by way of titles and privileges, the Dhammayuttika has the same with Maha Nikaya and even more," said social critic Sulak Sivaraksa.

There are several thousand Dhammayutika monks in Thailand, out of the 300,000 monks in the country.

"The Maha Nikaya has been feeling that they were deprived of their fundamental rights for so long. But since this country is a monarchy, most of them do not dare open their mouth openly," said Sulak.

The jostling for power by monks over who should be appointed Supreme Patriarch is not new to Thailand. In 2005, it played an important role in the formation of the Yellow Shirts political movement.

For the majority however, becoming a monk was not about attaining a high position, but rather to achieve individual enlightenment, and along the way help maintain good morality for the community.

Many monks feel alienated by the process of Buddhist governance in the country and feel that more needs to be done to improve Thai Buddhism.

"The monkhood as a whole, had for a long time, never had any role in appointing the Supreme Patriarch." said Phra Maha Paiwan Worawanno of Soi Tong temple in Bangkok "Some believe that by appointing a good leader, the monkhood would be better off.

"But if the system is flawed then a single good leader will not be able to reform the monks."

The role of Buddhism in Thailand has gone through many changes in the country’s history, reflecting its politics.

In 1941, the government that ended the absolute monarchy introduced democracy for the monkhood in the monastic law, allowing monks to choose their own parliament, leaders and court of law.

This ended in 1962 under the dictatorship of Field Marshall Sarit Thanarat, who returned the power of appointment to the king. This changed again in 1992 when the government granted the Supreme Sangha Council power to nominate its leader based on seniority of the monks.

The latest change, last December, returned that power to the king – an indication of the more assertive role the royal court will again play in religion.
TOP