Bangkok, Thailand -- The former Buddhist abbot at the heart of a stand-off with authorities at Thailand’s biggest temple has been stripped of his monastic rank by the king, the military government said on Sunday. 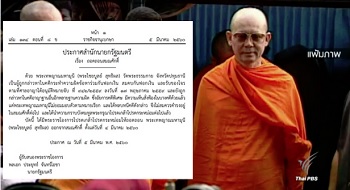 The symbolic step comes more than two weeks after police surrounded the scandal-hit Dhammakaya temple and began searching for Phra Dhammachayo, who is accused of money laundering.

The stand-off at the temple represents one of the biggest challenges to the authority of Thailand’s junta since it took power in 2014. The former abbot has not turned himself in and police say his followers have hampered the search.

A document published in the Royal Gazette said King Maha Vajiralongkorn had agreed to the government’s request to demote Phra Dhammachayo because he had not turned himself in and had fled from the charges against him.

“Thus he does not deserve to hold his monastic rank any longer,” the document said.

The measure does not mean Phra Dhammachayo has been defrocked as neither the king nor the government has the power to do that. Only a religious council can take such a step.

The Dhammakaya temple declined to comment on the measure.

The former abbot faces charges of conspiracy to launder money and receive stolen goods, as well as taking over land unlawfully to build meditation centres.

His aides dismiss the accusations as politically motivated. They say that he is too sick to face questioning and that they have not seen him for months.

The Dhammakaya Temple’s brasher approach to winning adherents jars on conservatives, who say it exploits its followers and uses religion to make money. The temple says it is as committed to Buddhist values as anyone else.
TOP