BANGKOK, Thailand -- Thailand’s Buddhist monks could soon be issued “smart ID cards” flagging any drug or criminal records, in the latest move by the junta to restore the tarnished image of the men in orange robes. 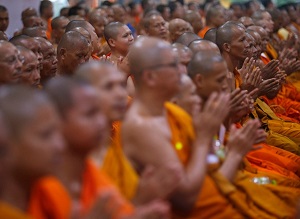 The kingdom has around 300,000 monks, who are held in high regard as keepers of the national religion.

But in recent months the clergy has been plagued by a series of high-profile scandals ranging from sex and drugs to murders taking place at temples.

The junta, which took power in 2014, wants to reorganise Thai Buddhism with misbehaving monks first in their crosshairs.

“Monks across the country already hold the paper-based cards but the information is out-of-date, which makes it hard to verify their background,” Ormsin Chivapruck, an official at the Office of the Prime Minister, told reporters on Thursday.

Digitalised smart cards would enable up-to-date tracking with the monk’s monastic history recorded alongside any criminal offence or report of drug use, he added.

The move is “to prevent fake monks using religion, or suspected wrong-doers from hiding their illegal acts behind orange robes,” he added.

Details will be discussed next week at a meeting of the Supreme Sangha Council, the body governing the national faith.

But rollout of smart cards may be complicated as all Thai men are expected by social convention to ordain for at least a few weeks.

Critics say the rigid hierarchy of the Supreme Sangha Council makes it unable to counter corruption or embrace change.

The government has already forced more than 46,000 temples to submit their financial accounts, amid claims of widespread irregularities.

The most famous monk scandal played out earlier this year as troops searched the temple of the mega-rich Dhammakaya sect on the outskirts of Bangkok, to arrest the controversial former abbot who is accused of money-laundering.

The abbot remains at large.
TOP