Preserving the past, one temple at a time

Bangkok, Thailand -- A community in the northern province of Lampang learned about the value of religion and working together through their determination to restore the ancient temple hall in Wat Pongsanuk 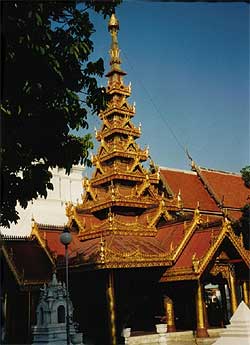 Buildings and other structures within century-old Thai Buddhist temples can reveal many things: They can show the religious attitudes of the surrounding community at the time of construction, the status of the society, and the imagination, and expertise of the artisans who designed, built and decorated them. Still, many of them have suffered a sad fate.

The communities that oversee them often fail to recognise the importance of these historic structures, and tend to place more importance on newer buildings than older ones. If they have the required funds, they waste no time in tearing down old buildings and replacing them with new ones; the quicker, the better. Unfortunately this is becoming too common a trend in Thailand.

But there is one place where the opposite thing has taken place. The 200-year-old viharn (temple hall) in Wat Pongsanuk in the province of Lampang, is an open-air structure without a surrounding wall. The building is square with a three-tiered roof and contains four seated Buddha images facing in four opposing directions.

The viharn of Wat Pongsanuk is a beautiful example of a highly developed form of Lanna art. It is well known to archaeologists and art historians and the local people revere it. But because of its age, the building and its ornate decorations have begun to deteriorate.

The monks at the temple and the residents of the surrounding community want to restore it. Experts from the Faculty of Fine Arts at Chiang Mai University came to their assistance by surveying the damage and devising a restoration plan. Given the high expense of the project and since neither the temple nor the community had much money, Nakhon Phongnoi, an art historian who is the director of the Rai Mae Fa Luang foundation stepped in to give advice on restoration and came up with a plan to obtain the funds to finance the project.

At the beginning of this month, people from the community met inside the viharn to find out how their building could be saved. It was a sight rarely seen: More than 200 local people listening to experts on restoration as they used blueprints of the structures to illustrate what they were saying. Slides created by photo artist Angela Srisomwongwathana displayed the building's beautiful architecture, as well as shots of restoration work that had been done on other buildings both in Thailand and abroad.

The meeting ended with a general agreement that the viharn should be reinforced and restored to its original beauty. This would be accomplished, not by tearing down the original structure and rebuilding it, but by replacing degraded or damaged materials so that after the restoration it would look exactly as it had when it was newly built.

After the meeting, representatives from each of the groups offered their perspectives about Wat Pongsanuk's viharn. Chatchai Tulaphan, who represented the community, said that at first the local people wanted to do the repair work themselves using artisans from within the community.

``They thought that it would cut expenses,'' he explained, ``but after they heard the recommendations from experts who had studied and completely analysed the building's structure and had devised a procedure for restoring them, they realised that there would be more to it than that.

``The experts explained what needed to be done and backed up their claims using technical information. It had to be explained gradually and thoroughly to the members of the community, making it clear why each of the various operations involved had to be done. There will have to be more meetings down the road, especially after work has begun, to answer any questions people may have.

``With regards to funding, we requested donations for specific parts of the project like the construction of roof supporters, should that be necessary, or the fashioning of new roof decorations like the chow fa. We have received quite a number of donations to restore the roof decorations because Thais believe that by helping out with the upper parts of the structure they will earn a lot of Buddhist merit.''

Prof Woralun Boonyasurat from Chiang Mai University's Faculty of Fine Arts explained that historical evidence shows that Lampang, which is older than Chiang Mai, was once a city of great importance, but was constantly engaged in wars.

``After the most devastating of them, Lampang was left deserted, and remained that way until 1821, when it was reunited [with the rest of the country],'' she explained. ``The population was very sparse, though, so its leaders brought in new residents from Chiang Saen [today's Chiang Rai] and Phayao. They all came to live together in Lampang. The centre of the revived city was the site of what is now the Wat Pongsanuk community.

``The community needed a temple, and it seems likely that Wat Pongsanuk was built at that time.

``Earth was piled up to form a mound and a high foundation was built on top of it. The viharn stands on that foundation, in accordance with beliefs passed down from the Brahmans. The elevated base and foundation are meant to resemble Mount Phrasumeru, the highest residence of Earth's celestial beings. The sharp-pointed roof of the viharn represents the peak of Mount Phrasumeru.

``These are the original Brahman concepts, but since Wat Pongsanuk is a Buddhist temple, the height of the structure means that Buddhism is the highest religion of this land. Inside the four Buddha images face the directions of the four points on a compass, symbolising the spread of Buddhism everywhere.

``These are the beliefs that underlie the temple's structure. They most likely come from many different sources, brought by people who came from many places, and they combined to produce architecture of the highest order. I don't think that another such structure remains that is more beautiful than this one.''

Nakhon Phongnoi, the director of the Rai Mae Fa Luang Foundation in Chiang Rai said that he saw the viharn of Wat Pongsanuk as a shining example of Lanna art, an architectural diamond, and that the reason he was taking part in its restoration was that he owed the structure a debt of gratitude.

``When the Haw Kham, a multi-purpose public building that is dedicated to the Royal Grandmother, was built, I was inspired by the viharn's sense of strong beauty.

``Although its ornamentation resembles folk art, it has a perfection and purity that is both simple and sincere. That's the special charm of this viharn.

``The building was last repaired about 50 years ago. It was done because the roof was leaking. The original roof was made of ceramic tiles, and when it started leaking the villagers covered the tiling over with cement. Now it's leaking again, and we think this time we will remove the cement and try to see what kind of ceramic tiles were originally used. Then we will make tiles like the ones that were used more than 100 years ago.

``Another problem is that the foundation has begun to sink. We will try to reinforce it, but there will have to be meetings to determine exactly how this should be done.

``To help with raising funds for the project we will be holding a thod kathin at the beginning of November. Lampang's arts and culture scene is very strong, and people from Bangkok who attend it will see many unique things specific to the province. Wonderful Lampang-style northern food will be prepared for those who come to the temple to make merit.''

Through its ongoing involvement in the Wat Ponsanuk restoration project, members of the community have learned much about the importance that religion plays in their life. The project has also given them a strong sense of community and an appreciation of artistic beauty; qualities that are hard to come by these days.