Thai abbot Phra Achan Bhusit Chan Khantitharo offers 11 tigers and five cubs a home at his temple. EDITH LIM writes about his hopes to rehabilitate tigers for the wild. 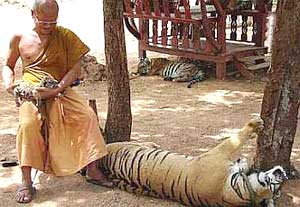 << Abbot Pra Achan Bhusit Chan Khantitharo has stopped having monks take care of the tigers as the turnover of monks at the temple is high and it is better for the tigers to have constant care from the same people.

But when Temple of the Tigers director Andrew Barron revisited the temple in May, he saw many changes. The temple now had only one abbot and two monks, aged four and eight, taking care of 11 tigers and five cubs. A tiger can weigh 180kg and a cub is the size of a donkey.

Ponchai, 8, bathes and cleans the cubs.

Why did the monks leave?

“The nature of monks is that they’ll stay at a monastery until they wake up one morning and decide to go to a different monastery.

But how did the tigers end up in a temple?

About a decade ago, some locals brought two cubs to the monastery, hoping the monks would take care of the animals. Apparently, some hunters had killed the mother tiger and tried to poison the cubs.

Over the years, more cubs were brought in.

“Now, staff dressed in blue uniforms take care of the tigers. They are trained by volunteer veterinarian Dr Somchai Visasmongkolchai.

The abbot had invited teams from Bangkok’s Chulalongkorn Veterinary University to perform full medical checks on the tigers.

“When I was there to film a sequel to the documentary, three cubs were born on camera. There will be lots of new footages of little cubs, which is lovely material.”

The sequel is entitled Temple of the Tigers Revisited.

A year ago, the abbot envisioned a Tiger Island Project with a deep moat encircling a 8.1-hectare sanctuary for the tigers to roam and breed freely. Unfortunately the project was stopped because of the high cost of explosives for blasting the rocky terrain.

So the abbot had a tiger housing crisis as four cubs were being born every year. A local business administration graduate volunteered as project manager to solve the crisis.

Jakkrit Boy Apisuthipangsakul envisions an observation station with 10 enclosures, each housing two tigers. The enclosure will be a big circle divided into 10 triangles. Two tigers will be released to the centre of the circle at a given time to exercise. Each tiger will have a sibling for company.

There will be a viewing platform on the roof of the enclosure for researchers.

Barron said the abbot had been inviting international researchers to help with the tigers.

“It has become a global concern,” he said.

The abbot’s long-term goal is for researchers to rehabilitate tigers to survive in the wild.

“Tigers have never been successfully released back into the wild. But the abbot hopes that, with international involvement, he will succeed.”

Four thousand local and international tourists visit the monastery every month in response to Temple of the Tigers. They donate to the Tiger Island Project which will costs 20 million baht (RM1.8 million).

Up till August, the fund is 15.3 million baht short.