Bangkok, Thailand -- On 10-15 January 2005 a group of Buddhist Bhikkhus, Bhikkhunis, nuns, laymen and lay-women, all together numbering 10 volunteers from various regions throughout Siam, through the coordination of INEB and its local network, went to join our brothers and sisters who were affected by the Tsunami tidal wave in the southern Phang-Nga province. We all kept an open mind and the willingness to accept all that may happen. 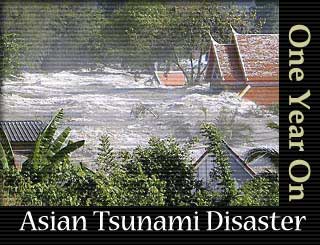 In these situations of calamities, the Teachings of the Buddha, Buddha Dhamma, is the most viable refuge, which is beyond religious rites and ceremonies. Our group visited numerous people affected by the Tsunami and provided emotional support through listening and lightening their emotional burden.

In one instance of initiating dialogue with the affected people, we feel that all of us at a point in time, were brothers and sisters, and this is what motivated and drove us to quickly travel to southern Thailand, especially to Phang-Nga, to offer whatever support is possible. This is perhaps what our volunteers from other NGOs are feeling.

From Bangkok, we had loosely planned our itinerary so as to adapt to ever changing circumstances. When we really went down fieldwork, we had to change our plans hour by hour and day by day. At this time, most of the folks still lived in tents, feeling troublesome as having to wait for long queues for various amenities, and having to put their belongings in some order. They had to follow up on various documents of personal identification in order to receive government assistance and to get evidence to support their rights of ownership to their land. We divided our group and went into eight refugee camps, stayed for over 3 nights in one camp. 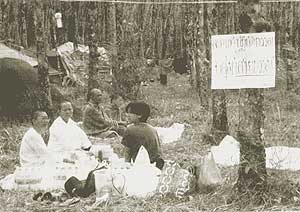 The provision of assistance to emotional hardship through the foundations of religious teachings which will facilitate each survivor to work within oneself and psychological heal one's emotional wounds by having mindfulness within the present moment; understanding rightly the current situation and the acceptance of an ever changing reality and possessing wholesome thoughts. This also includes the ability to recall one's mental capabilities and psychological strength to face up to the emerging and transient reality.

The emotional wounds are deep scars within the subconscious mind of each. This natural disaster is one of the world's tragic experience which adversely affected those who are directly involved, which is difficult to cure within a short period of time. We still also have those who are indirectly affected and feeling depressed as they are constantly exposed to news reports and stories of individual survivors as they go into the fieldwork of helping them. This includes volunteers of NGOs who have great feelings of empathy towards the survivors and unconsciously carry the emotional burdens of the people who are affected.

The tsunami tidal wave that destroyed the homes of people who are already troubled with poverty, debt, problems of nationality, the local fishermen, people who have no land title deeds such as the people of Mo-ken ethnic minority. There are also problems of Thai minorities who have been staying in Thai soil for many decades and yet have not been legally recognized as Thai citizen. Problems of prostitution, illegal migrant workers and transnational labour especially from Myanmar are right there. The Tsunami catastrophe has worsened the already existing problems of livelihood and well being of the people affected, and correspondingly have given us the opportunity to go to the south to understand and face the sufferings with the survivors.

We have listened to numerous stories, including those of a child stories who related the tragedy with a voice of innocence which is contradiction to those of elders which we hear the underlying tone of voice and their worried faces which signify great stress and suffering. We reflected that it has been over 100 days now, but there are still some people who are unable to sleep because they are afraid and fearful. Some even wake up in the middle of the night and fear the tidal wave will come back again. Many have told us that, in the middle of the night, just having the wind blow, feelings .of fear and images of the giant tidal wave comes into mind, and they would wake up like having a bad nightmare. Villagers that are survivors are still very afraid of sleeping in their own homes. They have to set up a group of rotating villagers to come in mid-day to oversee the homes and the domestic animals that live within the area. The sea which had been familiar before the Tsunami tidal wave, now needs time to provide assurance and confidence to the fishing villagers.

For women, especially mothers, although the Tsunami had passed, they still feel a sense of wrongfulness because they are unable to protect their child, they are constantly blaming themselves for the lost. Especially for mothers, who had carried their child in their arms, the tidal wave stole the child right beneath their eyes- Many mothers had told us with tears flowing down their cheeks that they still find the strength to live on is for the sake of their child. For some, they are still wailing to have the body of their child to return to them, so that a proper Buddhist cremation ceremony could be performed for the spirit to move on into the light.

Simply, the act of pouring lustral water by Buddhist monks and binding strings of blessed thread by Buddhist nuns onto the wrist of survivors, who have nothing—no possession, no home, no family—give them a sense of strength of will to face whatever may come. This is their only refuge, refuge in the Dhamma. In these tragic situations, the aspect of being exposed to the aura of tranquility within the Buddhist monks, Buddhist Bhikkhuni and nuns provide them with a feeling of hope that what they are suffering right now can be overcome through the exemplay behaviour of Bhikkhu. Bhikkhui and nun, where tranquility and internal peace comes from knowing oneself.

Temporary shelters at Baan Karaburi lementary school, Phang-Nga province have over 2UU persons. Tsunami survivors here initially came from Baan Pak Chok. Phra Thong Island, where everything—homes, fishing boats—were washed away by the Tsunami; including a Buddhist Ashrum where two Theravadin Buddhist Bhikkhus passed away. Villagers here invited us lo slay with them. We stayed for 3 days to receive alms food. One elderly woman villager said, "We would like to offer alms food to Buddhist Bhikkhus, Bhikkhunis and nuns in order to feel better. I would like to make the food that my child liked and offer the food as alms food to monks. For three days, all the Bhikkhu, Bhikkhuni, nuns will go on alms round, perform morning and evening chantings. During evening chantings, many people came and joined us, did meditation, listened to Dhamma talks and divided into various groups to talk to the ordained.