A Buddhist lesson in pet care

Chiang Mai, Thailand -- It's estimated that there are between 60,000 and 100,000 stray dogs and cats in Chiang Mai, Thailand's second largest city. Many of them have been dumped by their owners because they are suffering from disease or the owners can no longer take care of them. 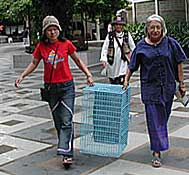 << Volunteers brining in a sick cat

These strays roam the city's streets or are left at one of Chiang Mai's many Buddhist temples, where people hope the animals will be taken care of. But the stray animal population is growing so quickly that the monks and nuns can no longer cope.

Two and a half years ago, a group of Westerners and Thais set up the Lanna Dog Rescue Project. The volunteers go around the city and visit temples to collect sick animals. They then take them to one of the local vets for treatment.

They also have the animals sterilised to try to reduce the population of stray dogs and cats. After being treated, animals in need of additional care are taken to a shelter where they remain until they have recovered. Then the volunteers take the animals back to the temples.

It may seem rather strange in a relatively poor country like Thailand to be paying so much attention to cats and dogs, but according to Roshan Dhunjiboy, it has to do with Buddhist philosophy. "There's a principle called metta which means love for every single living thing, from a blade of grass to your husband or your lover. And I think we are practising metta, at least I am as a Buddhist."

Many people drop their pets off at Buddhist temples because they believe that the grounds are sacred and that is where metta is being practised.  According to Otome Klein, another of the group's volunteers: "People who live near temples know that if they give the dogs or cats to the monks and nuns, they will probably be taken care of. But nowadays there are simply too many animals, many of them sick, arriving at the temples."

The animal owners cannot put their pets to sleep because it goes against one of the main precepts of Buddhism: though shall not kill. "We have great difficulty," says Dhunjiboy.

"When we have very sick animals to even find a vet who will do it. We had the case of a darling little puppy called Ton who had cerebral distemper and was suffering for five months, and we wanted to put him down, but the monastery wouldn't do it, and so he died naturally just a month ago."

Many of the volunteers joined the project because of their love for animals. Half of them are Westerners and the other half are Thais. The volunteers are able to raise about 100,000 Baht - that's a little over €2000 - a month. The money is spent on the medical costs, a shelter, vet care and neutering the animals.

Why not use the money to help poor Thais?

It's a question which the volunteers frequently hear, says Dhunjiboy. "Actually we are doing both because through this work with animals, we get to see the poor people who are otherwise invisible. The animals we deal with are the animals in temples, the animals on the streets, and the animals of poor people. You will find people in the slums here who have about eight children and about 11 dogs. And they all are hungry and they are all not looked after, so we help them by helping the animals and they love their animals. We teach them how to keep them healthy and clean and the children I think profit from that too in the end."

Since the project started two and a half years ago, the volunteers have been getting increasing support from local people. "We never do anything without the permission of the community," says Dhunjiboy.

"Because the communities are very well organised around the temples. For instance we had a mass sterilisation project just last month where we sterilized in four days 103 dogs and cats, and that was arranged by the community. They completely arranged it for us. We just brought the doctors. The more you involve them in this, the more they begin to realise that this is something beneficial for themselves and not only for us or for the animals, but for the whole community."

More and more Thais, even poor people, are trying to help these animals. Some of them go around on bicycles and feed up to 100 dogs a day! "They boil rice," says Klein, "they go around with a big pot mixed with some chicken meat and they distribute it every day in this stall or maybe in that little temple." Dhunjiboy, who comes from Pakistan, finds it amazing.  "You will find sick dogs here in Thailand, but you will hardly ever find a starving dog, the way you will find in India or Pakistan. People feed them. They may feed them badly because they have nothing else than pure rice to give them, but they will feed them. I think there is a basis there in Buddhism and this is one of the expressions of it. We have to care."