Hua Hin, Thailand -- The Tak Bat Dok Mai is a Buddhist ceremony in which locals offer flowers to the monks as a way of making merit. The ceremony is unique to Saraburi province. In addition to the offerings of cooked rice, food, incense, candles and other conventional sacred items, the Tak Bat Dok Mai ritual includes offerings of Dok Khao Phansa flowers that only come into bloom during the Buddhist Lent. 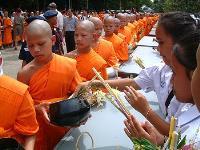 The Dok Khao Phansa, the yellow flowers with smaller violet petals, is commonly found in Saraburi province. As the Dok Khao Phansa becomes an increasingly rare find these days, lotus, jasmine and rose have become acceptable alternatives for these floral offerings.

In the morning of the first day of the Buddhist Lent, residents of the community engage in merit-making activities by presenting offerings to the resident monks at the Wat Phra Buddhabat temple. Later in the morning, young couples venture out into the forested foothills to gather the Dok Khao Phansa flowers. Meanwhile in the district area, the candle procession and the "Tak Bat Dok Mai" procession head towards the temple courtyard.

As a prelude to the floral merit-making ritual which takes place in the afternoon, a variety of traditional folk games and cultural performances are featured.

Contests such as the long-drum dance, candle and Thai costume contests keep the audience entertained. In preparation for the "Tak Bat Dok Mai" merit-making ritual, Buddhist devotees line up along both sides of the street forming a long line that extends from the "mondop" or seven-tiered temple spire and trails back along the streets. This forms a passage along which hundreds of monks and novices file past to accept sacred offerings.

The monks then ascend to the Shrine of the Holy Footprint where the offerings received are in turn presented as a tribute to the Lord Buddha. Once the ritual has been completed, the Buddhist devotees pour water over the feet of the monks and novices in the belief that in doing so, the sins of the worshippers are washed away.