Thailand: Lanna legacy gets a face-lift

Thailand's  Fine Arts Department is currently renovating some venerable old temples in the North and, in a break from past practices, is consulting local residents about how best to go about the work

Bangkok, Thailand -- To encourage young people to take pride in their culture and better appreciate the accomplishments of their ancestors, textbooks and lectures are simply no substitute for seeing structures and artefacts from the past with one's own eyes. 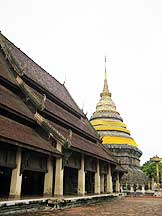 Which is why the Fine Arts Department is currently restoring 13 ancient temples in the North, all registered as national treasures, to their original beauty.

The project was undertaken by the Ministry of Culture to celebrate the 60th anniversary of His Majesty's accession to the throne and, diverging from previous practices, officials are welcoming input from monks and local communities in order to remain faithful to the spirit of the Lanna artisans who built and decorated these temples.

Among them is the venerable Wat Phra That Hari Phun Chai in Lamphun, where new walkways are being constructed and landscaping work is under way to restore the sanctity and aesthetics of the place. 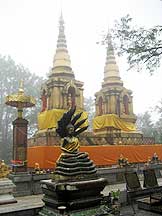 "Look at that alloy fence," said Kraisin Uunjaijin, a Chiang Mai-based archaeologist, pointing at a silvery, baroque-style barrier. "Things like that should be removed."

Also being renovated is Wat Chamdevi (aka Wat Ku Kud) in the same province, site of the oldest chedi (bell-shaped stupa) in the North. According to Kraisin, the compound is being restored in a sensitive way so as to retain as much of the original artwork and architectural detail as possible. "We're not going to change anything unnecessarily," he said. "Basically, we're going to focus on strengthening the structure of the building."

One of the most visited temples in the Kingdom, Chiang Mai's Wat Phra That Doi Suthep, is also on the make-over list. During earlier renovation work carried out there, the ground around its Phra That, a chedi enshrining relics of the Buddha, was covered with marble. While many visitors thought the marble made the stupa look a lot cleaner and neater, it later transpired that the laying of this expensive stone was actually causing damage. 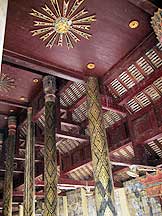 << An interior view of the `viharn' at Wat Phra That Lampang Luang.

"Marble obstructs the evaporation of moisture and heat," Kraisin explained. "Therefore the moisture and heat are now being released through the Phra That, which is constructed of cement and bricks."

While Wat Phra That Doi Suthep is famous for its grandeur and elevated position, the draw at Wat Phan Tao, also in Chiang Mai, is its exquisite wooden structure. Built 158 years ago, almost every part of the viharn (assembly hall) which houses Buddha images and murals was constructed from teak, which seems to emanate a holy, mind-soothing atmosphere. The wood is coated with "dragon's blood", a natural substance that protects it from rain and other moisture. Despite much effort over the years to maintain the viharn, time has inevitably eroded its elegance. Some of the roof tiles are cracked or missing, the hang hong (lower finial on the roof) is broken and the cement floor ruined. 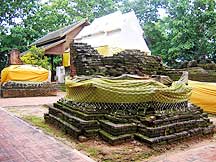 In restoring the temple the Fine Arts Department has decided to use ancient techniques as much as possible. For example, a traditional construction material called poon mak will be used instead of regular concrete. The basic ingredient is cement, to which are added ground shells, resin, molasses or other materials available in the locality. "Poon mak lasts longer," explained archeologist Chinnawut Wilayalai, "and it doesn't turn dark so quickly."

Chiang Mai's Wat Duang Dee is also on the list. Its tiny ubosot (ordination hall), the building where the holiest rites are held, boasts a most interesting architectural feature: It was constructed entirely without pillars, the weight of the roof and walls being supported by beams, joists and wall-panel supports. The decorative detail on the nah ban (gables) will be repaired with red lacquer and then gilded. 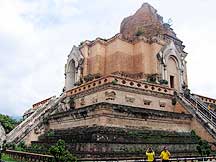 The renovation project will also include well-known temples in Chiang Rai such as Wat Phra Worachin That Chao Doi Tung. A particular object of veneration for Burmese and Laotian people, the two chedi there have octagonal bases, a typical feature of Lanna art. In 1973, however, these stupas were covered with cement and entirely remodelled, making them resemble something built in the Rattanakosin style most closely associated with structures in Bangkok and the Central Plains. According to Somrit Luechai, an historian and TV talk-show host, the change came about as a result of political tension between Thailand and Burma; at that time the government was afraid that Rangoon might use the temple's Lanna architecture as a pretext to claim ownership over it.

This is an example of the mistakes that can be made when the central government, ignorant of the subtleties of regional cultures, reaches a decision without consulting people from the area, Somrit said. 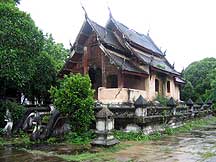 Now that tensions along the Thai-Burmese border have eased somewhat, local monks and lay people want the chedis restored to their original form.

"For Chiang Rai people, Phra That Doi Tung is the most important religious site. It is deeply respected and part of our culture. In the old days, we followed the tradition of climbing the doi [small mountain] to gather around the Phra That on the full-moon night in the third month [of the Buddhist calender; February in the Gregorian calendar] every year," said Somrit, himself a native of Chiang Rai.

Certainly, the renovation ought to please local residents since the Fine Arts Department has responded to their demands by agreeing to repair the naga staircase and landscape the temple compound.

As for the craftsmen doing the actual work, Somrit said the department is concentrating on hiring local artisans, reasoning that these are the individuals who best understand the art and culture of a particular locality.