Prosecutors let monk off the hook

Bangkok, Thailand -- It did not come as a surprise. Despite serious allegations of embezzlement and distortion of Theravada Buddhist teachings, few believed the justice system could bring down Phra Dhammachayo, whose followers include many powerful politicians in the government. 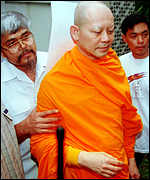 The public prosecution's decision to drop the criminal charges against the wealthy and influential abbot of Wat Dhammakaya on Tuesday has confirmed such scepticism, which inevitably puts the credibility of the judicial system into question.

Both stealing and distortion of Buddhism are serious violations of the monks' code of conduct. Had the court case been allowed to run its course and had Phra Dhammachayo been ruled guilty, he would have been disrobed and imprisoned. Without the charismatic leader at the centre of the cult-like temple, Wat Dhammakaya would have gone down with him.

But according to the public prosecutors, continuing the court case would create serious divisiveness within the clergy and among Buddhists both in and outside the country. A far-fetched claim, to say the least.

To back up their case, the prosecutors claimed that Phra Dhammachayo and Wat Dhammakaya have now turned over a new leaf. To start with, the abbot has returned land and money worth nearly 960 million baht to his temple. As to his teachings that contradict the Lord Buddha's on Non-Self, the prosecutors cited support for Dhammakaya from the Ecclesiastical Council and official authorities to guarantee that Dhammakaya teachings are now true to Buddhism.

Moreover, Dhammakaya is highly praised for financially supporting the religious activities of the clergy and the government as well as for using high-technology to effectively promote Thai Buddhism overseas.

Since it is common knowledge that Dhammakaya has strong ties with politicians and senior monks, these guarantees cannot ease public suspicions of political interference in the Dhammakaya court cases.

We must not forget that the Supreme Patriarch has already ruled that Dhammakaya has distorted Buddhism and created serious rifts in the clergy, a serious crime in monastic circles that demands heavy punishment.

The Supreme Patriarch also requested Phra Dhammachayo to return money and land to the temple. But he had stubbornly refused, until the prosecutors told us otherwise just this Tuesday.

Obviously fearful of looking disrespectful to the Supreme Patriarch, the prosecutors took pains to explain away their move to free Dhammachayo as well as to choose the right timing to do so. The timing could not be more perfect.

The Dhammakaya court case has been dragging on for so long that most people have lost interest. The press is currently too busy with heated politics of the day to bother with old news. The public is emotionally exhausted with political divisiveness caused by our Dear Leader to take up another controversy. The ailing Supreme Patriarch has long been hospitalised. For Dhammachayo's supporters who are politicians in power, time is also running out. Now that they are losing their grip, they know they must act before it is too late.

It must be noted that the prosecutors did not say that Phra Dhammachayo is not guilty. Instead, by saying he has returned what is not his and is now teaching according to the Buddhist canon, they have conveyed that the wrongdoings did take place, but that he has repented.

If that were the case, is it right for the prosecutors to drop the charges when a ruling was so near? Since this case involves the core teachings of Buddhism, is it right for the prosecutors to use the unfinished court case to whitewash Dhammakaya? If it turns out that Dhammakaya teachings remain much the same, the prosecutors would not only be accused of interrupting the judicial process, but also of undermining Theravada Buddhism. The prosecutors insist that at this political juncture, the country needs social harmony more than ever, so continuing the Dhammakaya case would not serve the public benefit. The question is, by cutting short the legal process, whose benefit does it serve?