BANGKOK, Thailand -- Hundreds of Buddhist monks led by at least nine elephants marched to parliament in the Thai capital to demand that the country's new post-coup constitution enshrine Buddhism as the national religion. 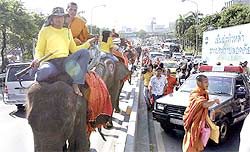 "Buddhism is increasingly coming under threat," Thongchai Kuasakul, head of the Buddhists' Network of Thailand who led the march, said in a statement Wednesday.

Buddhism could be undermined and gradually phased out from Thailand, he said in the statement, citing violent incidents in the Muslim insurgency-wracked south where monks have been killed, temples bombed and fearful Buddhists have abandoned their homes.

More than 2,000 people have been killed in the south since the insurgency flared in 2004. More than 90 percent of Thailand's 64 million people are Buddhists, and Muslims — who form the majority in the deep south — have long complained of discrimination.

Nine elephants led hundreds of Buddhists in an eight-hour march Wednesday under a scorching sun from Bhuddhamonthon- a major Buddhist center in the central province of Nakhon Pathom — to the parliament building in the capital, Bangkok.

They reached parliament by dusk. Most sat peacefully in front of the building, chanting Buddhist prayers. They were expected to remain there overnight.

Elephants, considered sacred by many Buddhists, are often used in Thai religious ceremonies.

Police failed to persuade the monks, who were joined by hundreds of supporters, to leave the elephants at the city limits as they marched into the capital, leading to brief scuffles.

The march came a day after coup leader Gen. Sonthi Boonyaratglin backed the idea of recognizing Buddhism as the national religion, amid a worsening Islamic insurgency in the south.

The first draft of a new post-coup constitution, made public last week, retains the wording on the topic from Thailand's previous constitution, from 1997. It does not name Buddhism as the national religion, and says the state will protect all faiths.

However, Sonthi said he expected the charter's drafting committee to "review its decision on this issue," The Bangkok Post newspaper reported Wednesday.

"If a stipulation in the charter to this effect leads to peace in the country, then it is better that it is included. Those who say there is no need for such a stipulation don't take the issue that seriously," the newspaper quoted Sonthi as saying.

Sonthi also recommended adding a clause requiring the government to "take care of other religions, including Christianity and Islam."

Wednesday's protest was the latest in a series of demonstrations by monks. It revives a debate dating back to 1997, when a campaign to make Buddhism the national religion was dropped amid concerns that it would divide the country.

Thailand's 1997 constitution was scrapped after a September 19 coup that ousted then-leader Thaksin Shinawatra.

Coup leaders appointed a committee to draft a new constitution that is expected to be put to voters in a referendum as early as September, ahead of elections scheduled for the end of the year.