Drug addicts vomit out their ills in Thailand monastery

THAM KRABOK, Thailand -- An obscure Buddhist monastery in central Thailand that advocates a secret herbal potion and ritual vomiting for drug addicts has become a final source of hope for thousands of Thais and Westerners. 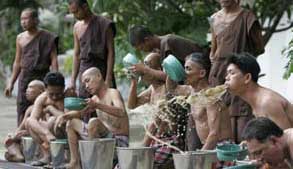 Since its foundation in 1959, Wat Tham Krabok, 140 km (85 miles) north of Bangkok, has put nearly 100,000 addicts through its "cold turkey" detox program and given them a grounding in meditation to help them keep on the straight and narrow. The treatment -- a far cry from the picture postcard beaches, jungle trekking and wild nightlife that draw millions of visitors to Thailand each year -- is not for the faint-hearted.

Dressed in red hospital-style overalls, patients have to stay for a minimum of 10 days, during which they are subject to a strict regimen of leaf-sweeping, steam baths, herbal medication and group vomiting.

"Invariably, the people who end up here come as a last resort," said Phra Hans, a Swiss psychologist who became a Buddhist monk -- with the title "Phra" -- after visiting Tham Krabok seven years ago.

"Everybody who comes here must come as a warrior, ready to fight for their life."

Sitting in the shadow of an imposing limestone crag, the monastery was founded in the late 1950s by a group of monks who decided to renounce all earthly pleasures and live out the rest of their days in a cave.

However, the military rulers of the day, keen to rid the capital of its opium dens, encouraged them to accept a large plot of land in return for taking care of the drug addicts the army was booting out of Bangkok.

Using a complex herbal medicine whose ingredients were revealed to the aunt of one of the monks in a dream, the monastery started treating its first opium addicts in 1959.

To this day, the 100-odd ingredients of the thick, dark potion that lies at the center of the detox program remain a secret known only to Tham Krabok's abbot and medicine monk.

"I've no idea what's in it. There must be some sort of active ingredient, but the only thing I know for sure is it's disgusting," said Patrick, a British health worker who has spent three months at the wat overcoming alcohol and cocaine addiction.

In what is now a well-choreographed ceremony, patients sit cross legged and side-by-side in front of a long open drain. Accompanied by drums and chanting they then try to drink a bucket of water before sticking their fingers down their throats.

Along with the myths surrounding its foundation and herbal cocktail are varying accounts of the long-term success rates of the treatment.

However, Prah Hans said reports of relapse rates as lows as 30 percent -- levels unheard of in Western drug addiction therapy -- are unverifiable.

"We really can't say. Full recovery takes five years or more, and we just don't have the resources to keep track of patients. We can't follow them," he said. "Cleaning out the body is only five percent; the other 95 percent is in the mind."

Regardless of their religious or ethnic backgrounds -- 80 percent of patients are Thai Buddhists, the rest foreigners of all denominations from across the globe -- are given a Buddhist "sacca", or vow, in which they swear never to touch drugs or alcohol again.

For some former addicts, the six-word Thai phrase does work in warding off temptation.

"Every time I get that little voice in my head and think I'm getting into trouble, I just close my eyes and say the words in Thai, and I'm OK," said Adam, a Londoner who turned to Tham Krabok after 17 years of trying and failing to beat heroin and crack addiction in Western rehab clinics.

"My mind used to race at 1,000 mph and I couldn't slow down. I couldn't work, couldn't read books. But then I tried the meditation and felt really calm," he said. "It's very different to Western rehab."

The wat has its detractors, not least British rock star and celebrity junkie Pete Doherty, whose departure after only three days led to tabloid newspapers depicting the wat as a prison camp in which patients were beaten with bamboo poles.

Phra Hans denied any such claims.

"Pete Doherty ran away because he wasn't ready. It was a dreadful episode. We can't lock people away or hold them against their will because that is a violation of human rights," he said.

"We only want people who are ready and who are serious about getting clean."