Mystery of the west-facing ubosot

Bangkok, Thailand -- Zooming in on Wat Chakrawat in Bangkok’s Chinatown in his PC-based mapping software, an American discovered that a certain building layout in the Wat Chakrawat temple did not make sense. 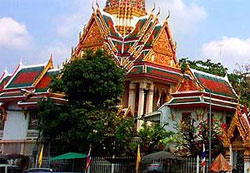 << The ubosot in Wat Chakrawat

The ubosot (ordination hall) that was built in 1827-1829 faced west, contrary to the conventional eastward orientation of such a building.

“It was a strange anomaly,” said Edward Van Roy, a visiting fellow at Chulalongkorn University’s Institute of Asian Studies, recalling his discovery about a decade ago. “Usually the monks would sit at the east side so that they could face the Buddha image at the west.”

Intrigued, Van Roy studied the temple records, which were written in the Thai language, to try to unravel the mystery of the west-facing ubosot.

“It (solving the mystery) was like doing a very difficult crossword puzzle. And it was frustrating as I’m not fluent in reading Thai,” he said.

With information gathered from the temple records and other sources, he placed on his mapping software, layer after layer, maps of the physiography of Wat Chakrawat and its surrounding area. Eventually, he had ten layers of what the area looked like: from the present to the reign of King Taksin who ruled Siam from 1767 to 1782.

After months of frustrating historical detective work on physical entities, Van Roy saw the light. The American found that the ubosot was directly in line with a massive Khmer-styled royal tower (prang) and the Emerald Buddha (Phra Kaew Morakot) in the Grand Palace.

“The ubosot’s westward direction faces the (Emerald Buddha) and that testifies to the devotion of Chaophraya Bodindecha, the builder of Wat Chakrawat, to King Rama III,” Van Roy wrote in Sampheng: Bangkok’s Chinatown Inside Out.

The maps that detailed more than two centuries of Sampheng’s physiography, the American admits, were like a compass helping to direct him to solving the historical mystery. “I would not have been able to orient myself otherwise. It is very difficult from the ground level to see directions,” he explained.

At Starbucks in Bangkok’s Central Chitlom, a department store that originated from Chinatown, the author explained that a Thai-language compendium, Sampheng: History of a Chinese Community in Bangkok, published in January 2006, was the inspiration for his book.

Although he found the compendium inspiring, Van Roy did not think it warranted an English translation.

“It contained many mistakes and there were other things about Sampheng which were not covered. With the editor’s permission, I translated, revised and expanded the compendium,” said Van Roy.

And the book, which was published in January 2007, became “in a sense a walking tour of Sampheng, but from a thinking man’s point of view,” said the author. For each site mentioned in the book, such as World’s Largest Solid-Gold Dragon or Best Coffee in Town, the author explains its significance over some six pages.

If his father had his way, the 69-year-old author probably would not have written an anthropological book on Chinatown, which Van Roy became fascinated with because of his father-in-law’s Thai-Chinese background.

From young, Van Roy had yearned to be an anthropologist. In a bid to dissuade him from such a calling, his father arranged for him to visit an anthropologist at the Museum of Natural History in New York City, which was close to where they lived.

“Do you see these boxes (big crates filled with broken pieces of potteries) next to me? The next few years I am going to sit here and try to reconstruct the pots.

“It is a terrible job. Not only that, I get a low salary. Don’t be an anthropologist!”

“My father, who wanted me to follow his footsteps as a merchant, forced me to study economics. But I ended up doing a PhD in economic anthropology,” Van Roy said, chuckling at the “little trick” he played on his dad.

Eventually, Van Roy ended up in Thailand working with the United Nations as a social economist. Since 1975, he has lived in the country of his Thai wife, who has Chinese blood.

When he retired in 1997, Van Roy learned to use a mapping software that allowed him to do an in-depth historical analysis of Bangkok from a physiographic point of view.

And in his analysis, the economic anthropologist uncovered historical mysteries such as the west-facing ubosot.

What is an Ubosot?

The ordination hall, where new monks are ordained and other important ceremonies take place. The ubosot is not necessarily the largest building in a temple compound, and may not always be open to the public. In fact, the ubosot is supposed to be off limits at all times to women, but this rule is seldom enforced. The ubosot will always have an alter with at least one Buddha image, making it hard to tell the difference between a Bot and a Wiharn. The easiest way to tell the difference is that only the ubosot will be surrounded by Sema stones. Bot can also refer to a Christian church building.